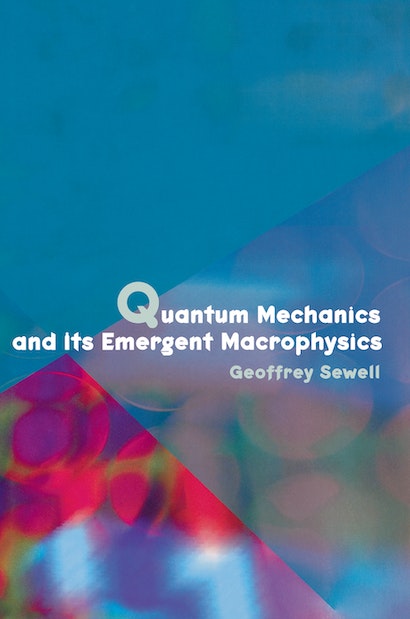 The quantum theory of macroscopic systems is a vast, ever-developing area of science that serves to relate the properties of complex physical objects to those of their constituent particles. Its essential challenge is that of finding the conceptual structures needed for the description of the various states of organization of many-particle quantum systems. In this book, Geoffrey Sewell provides a new approach to the subject, based on a “macrostatistical mechanics,” which contrasts sharply with the standard microscopic treatments of many-body problems.


Sewell begins by presenting the operator algebraic framework for the theory. He then undertakes a macrostatistical treatment of both equilibrium and nonequilibrium thermodynamics, which yields a major new characterization of a complete set of thermodynamic variables and a nonlinear generalization of the Onsager theory. The remainder of the book focuses on ordered and chaotic structures that arise in some key areas of condensed matter physics. This includes a general derivation of superconductive electrodynamics from the assumptions of off-diagonal long-range order, gauge covariance, and thermodynamic stability, which avoids the enormous complications of the microscopic treatments. Sewell also unveils a theoretical framework for phase transitions far from thermal equilibrium. Throughout, the mathematics is kept clear without sacrificing rigor.


Representing a coherent approach to the vast problem of the emergence of macroscopic phenomena from quantum mechanics, this well-written book is addressed to physicists, mathematicians, and other scientists interested in quantum theory, statistical physics, thermodynamics, and general questions of order and chaos.

Geoffrey Sewell is Professor of Mathematical Physics at Queen Mary, University of London. His previous book, Quantum Theory of Collective Phenomena, is a classic in the field.

"A clear, well-paced and compact exposition which, through a nice intertwining of physics and mathematics, leaves the reader with a rather complete grasp of the beautiful theoretical construction that goes from the algebraic quantum mechanical framework to thermodynamics, phase transitions and dynamical phase transitions. . . . It offers a road map to a number of central problems in mathematical statistical mechanics. It offers paved access to fascinating physics and mathematics."—Roberto Fernandez, Mathematical Reviews

"Sewell's book begins with a self-contained introduction to algebraic quantum theory (especially of infinite systems); and this, together with the fact that Sewell always develops only as much mathematics as he needs for his physics, means that his 300 page book provides a masterly overview of his field."—Jeremy Butterfield, Philosophy of Science

"A beautifully written book: the physics is well described, the mathematics is precise, and the exposition is concise. Sewell achieves his stated purpose–—namely, to offer a panorama of the current state of the problem of how macroscopic phenomena can be interpreted from the laws and structures of microphysics."—Gerard G. Emch, University of Florida