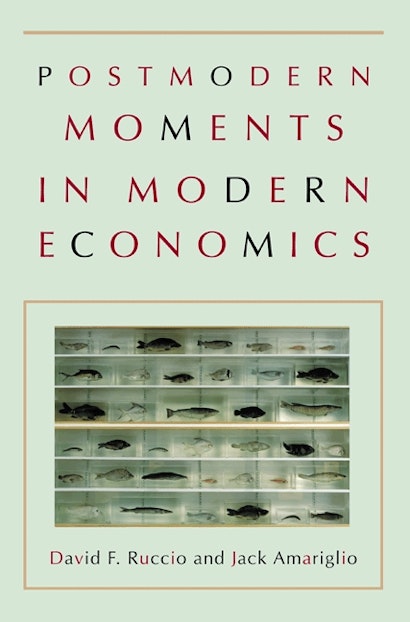 Of all the areas of contemporary thought, economics seems the most resistant to the destabilizing effects of postmodernism. Yet, David Ruccio and Jack Amariglio argue that one can detect, within the diverse schools of thought that comprise the discipline of economics, “moments” that defy the modernist ideas to which many economists and methodologists remain wedded. This is the first book to document the existence and to explore the implications of the postmodern moments in modern economics.


Ruccio and Amariglio begin with a powerful argument for the general relevance of postmodernism to contemporary economic thought. They then conduct a series of case studies in six key areas of economics. From the idea of the “multiple self” and notions of uncertainty and information, through market anomalies and competing concepts of value, to analytical distinctions based on gender and academic standing, economics is revealed as defying the modernist frame of a singular science. The authors conclude by showing how economic theory would change if the postmodern elements were allowed to flourish.


A work of daring analysis sure to be vigorously debated, Postmodern Moments in Modern Economics is both accessible and relevant to all readers concerned about the modernist straightjacket that has been imposed on the way economics is thought about and practiced in the world today.

David F. Ruccio is Associate Professor of Economics at the University of Notre Dame. He is the editor of the interdisciplinary journal Rethinking Marxism, and coeditor (with Jack Amariglio and Stephen Cullenberg) of Postmodernism, Economics, and Knowledge. Jack Amariglio, Professor of Economics at Merrimack College, was the first editor of Rethinking Marxism and is coeditor of Postmodernism, Economics, and Knowledge.

"No other treatment of economics and postmodernism, including those written by the same authors, is as good as this one. The first chapter, which introduces postmodernism and constructs a genealogy of postmodernism in economics, is excellent. The last chapter . . . is a great addition because it challenges the notion that the economics expert has an unqualified 'better' understanding of the economy that the person on the street."—Choice

"Economics and postmodernism?! Yes: and so it should be. If 'postmodernism' is taken to mean in economics, 'something beyond Samuelsonianism c. 1948,' then the field certainly needs a big dose of it. Ruccio and Amariglio are Marxists, but I am inclined to forgive them this peculiarity (and anyway they do it in a very rethinking—Marxism way), since they write like angels and think like angels, too. This is the real thing. Bringing economics—kicking and screaming—into the twenty-first century."—Deirdre N. McCloskey, author of The Secret Sins of Economics

"This is an excellent and important book. All of the chapters are very good, but the first chapter is truly outstanding. It is the best discussion of 'postmodernism in economics' anywhere in the literature."—D. Wade Hands, author of Reflection without Rules

"Forthright, concisely argued, engaging, and provocative, this book provides a critical commentary on the appearance of postmodern ideas in economic thought. But it is much more besides. There is currently no other text that brings together the material assembled here and that lends it coherence, while also pointing to the research agenda inscribed within it. The authors provide an informed guide to past and recent developments in the economic literature, but they also reveal a terrain littered with neglected challenges and unrealized but potentially productive projects."—Judith Mehta, Open University, United Kingdom