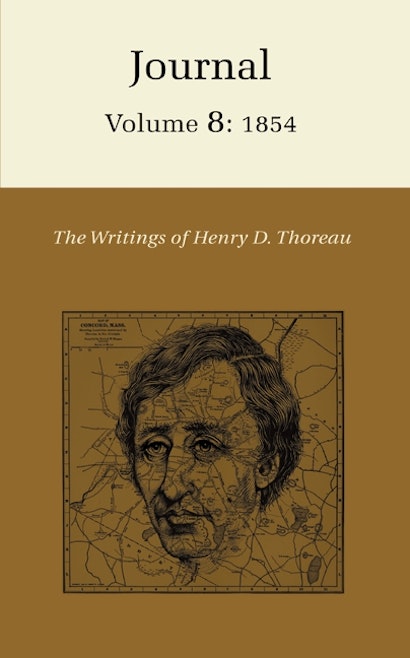 From 1837 to 1861, Thoreau kept a Journal that began as a conventional record of ideas, grew into a writer’s notebook, and eventually became the principal imaginative work of his career. The source of much of his published writing, the Journal is also a record of his interior life and of his monumental studies of the natural history of his native Concord, Massachusetts. Unlike earlier editions, the Princeton edition reproduces the Journal in its original and complete form, in a reading text free of editorial interpolations but keyed to a comprehensive scholarly apparatus.

Journal 8: 1854 is edited from the 467-page notebook that Thoreau kept February 13-September 3, 1854. It reveals him as an increasingly confident taxonomist creating lists that distill his observations about plant leafing and seasonal birds. Two particularly significant public events took place in his life in the summer of 1854. On July 4, at an antislavery rally at Framingham, Massachusetts, Thoreau appeared for the first time in the company of prominent abolitionists, delivering as heated a statement against slavery as he had yet made. And on August 9, Ticknor and Fields published Walden, the book Thoreau had been working on since 1846. In Journal 8 Thoreau indicates that these public accomplishments, though satisfying, took a toll on his creative life and did not fully compensate him for the hours spent away from the woods.