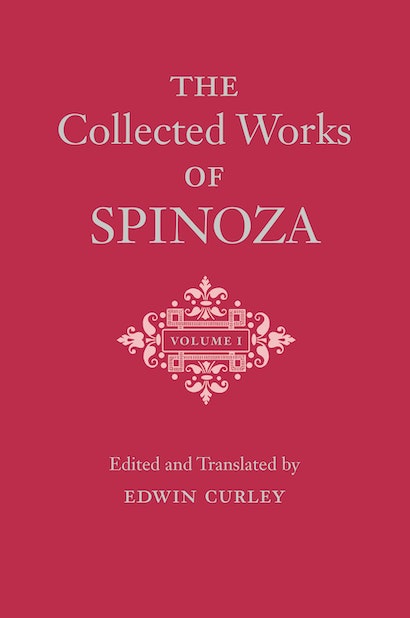 
This first volume contains Spinoza’s single most important work, the Ethics, and four earlier works: the Treatise on the Emendation of the Intellect, the Short Treatise on God, Man, and His Well-Being, Descartes’ “Principles of Philosophy,” and Metaphysical Thoughts. Also included are Spinoza’s letters from the periods when these works were being written.


The elaborate editorial apparatus—including prefaces, notes, glossary, and indexes—assists the reader in understanding one of the world’s most fascinating, but also most difficult, philosophers. Of particular interest is the glossary-index, which provides extensive commentary on Spinoza’s technical vocabulary.


A milestone of scholarship more than forty-five years in the making, The Collected Works of Spinoza is an essential edition for anyone with a serious interest in Spinoza or the history of philosophy.

"This wonderful volume is as much an edition as it is a translation. . . . [Curley's] renderings bring one much closer to what Spinoza actually wrote than do those of any previous translator of Spinoza into English. . . . Curley's volume will stand alone for the foreseeable future; indeed, it is hard to imagine anything ever supplanting it as the chief Spinoza research tool for Anglophones."—Jonathan Bennett, Philosophical Review

"Curley's translation surpasses all of the others in accuracy and reliability."—H. G. Hubbeling, Journal of the History of Philosophy

"Curley succeeds on all counts in this invaluable aid to an understanding of an important, but difficult, rationalist philosopher."—Leon H. Brody, Library Journal

"Curley's edition has been compiled with great care, thoroughness, and skill. We now have, at long last, the first part of a superb English edition of Spinoza's writings, with reliable, uniform translations and an extremely useful scholarly apparatus. All of this makes Curley's edition indispensable to students of Spinoza and modern philosophy."—James C. Morrison, Canadian Philosophical Reviews

"Far more than a fresh translation. . . . [A] model of the translator-editor's art."—B. A. Gerrish, Journal of Religion

"Curley's annotated translation of Spinoza is a great scholarly achievement that will set a standard for the field."—Margaret D. Wilson, Princeton University

"Curley has put all historians of modern philosophy deeply in his debt with the first volume of The Collected Works of Spinoza."—Maurice Mandelbaum, Johns Hopkins University

"This work is a superb scholarly translation of Spinoza, which also puts at our disposal the necessary aids for introducing his writings and treating problems concerning text and doctrine. The work gives us the long-awaited instrument for studying Spinoza in the English language and with the assistance of recent Spinoza scholarship."—James Collins, St. Louis University

"Our grip on Spinoza's texts can now be firmer than it ever could before, thanks to Curley's translation and to his editorial apparatus. Both are indispensable for serious scholarly work on Spinoza, even by those who know Latin and more especially by those who don't."—Jonathan Bennett, Syracuse University