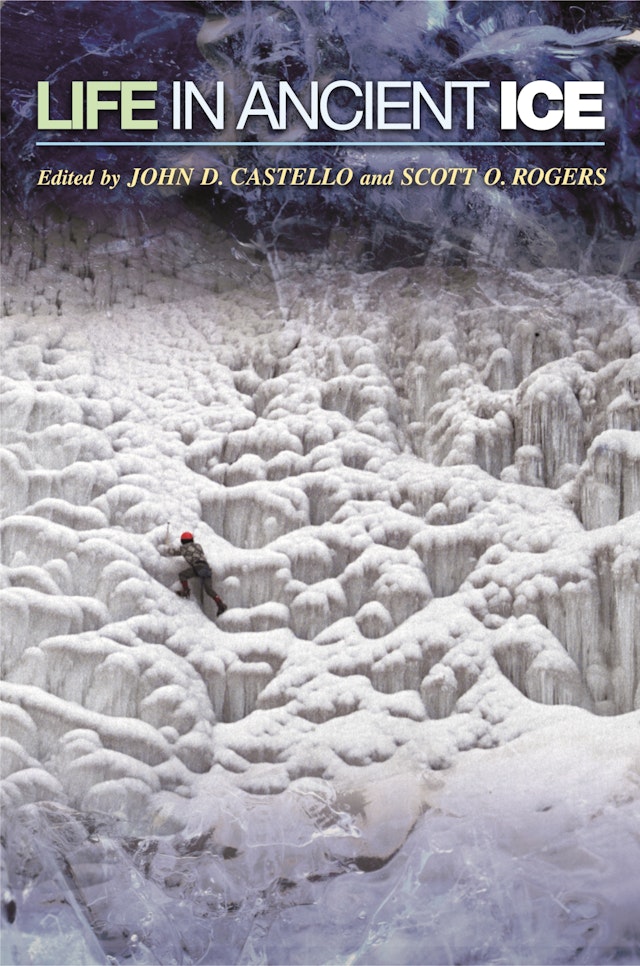 Life in Ancient Ice presents an unparalleled overview of current research into microbial life in ancient glacial ice and permafrost. Particulates of fungi, bacteria, pollen grains, protists, and viruses are carried by wind around the globe. When they fall to Earth in polar regions they may be trapped in ice for hundreds of millennia. Some of the many implications sound like science fiction — for example, might melting glaciers release ancient pathogens that yield modern-day pandemics? But rigorous, coordinated research is nascent. This book points the way forward. Based on a National Science Foundation-sponsored symposium organized by the editors in 2001, it comprises twenty chapters by internationally renowned scientists, including Russian experts whose decades of work has been rarely available in English.


The book begins by setting forth many protocols that have been used to study microorganisms trapped in ice, discussing their potential sources and presenting evidence for microbial metabolic activity at temperatures below freezing. This is followed by nine chapters describing the fungi, bacteria, and viruses that have been found in permafrost and glacial ice. Later chapters include a look at Antarctica’s subglacial Lake Vostok, at a robot that can be lowered into ice to detect microbes, and at the use of icy environments on Earth as model systems for studying similar environments on planets and moons. The editors conclude by reviewing key discoveries and outlining important areas for future research.

"Castello and Rogers have brought together many of the world's experts on life in icy environments and have produced a most comprehensive and timely compilation of information on this exploding area of research. This book is a useful guide for experts looking for more information on specific environments or protocols and for those whose interest is more casual. It will be a well-thumbed addition to my bookshelf."—Brian Lanoil, University of California, Riverside

"From the icy worlds of Lake Vostok, Antarctica, to the ancient permafrost soils of Siberia, this volume defines and explores the new science of subsurface ice microbiology. The contributing authors describe the diversity and microbiota of ancient ice environments on modern-day Earth, the multiple challenges of deep-ice exploration, and the broader significance of these systems as genetic storehouses and models of preservation and survival under extreme cold. This book captures the excitement of a new frontier in microbial ecology."—Warwick F. Vincent, Laval University, Canada

"The thought of surviving, even prospering, deep within ice and permafrost sent a shiver down my spine. However, for selected microorganisms this is a strategy for long-term survival in one of Earth's most extreme habitats. This authoritative collection of 'cold facts'—the first of its kind—provides a comprehensive account of the occurrence, physiological adaptations, and ecological implications of microbes that are frozen in contemporary time. The implications of this research are broad, reaching from sub-glacial lakes in Antarctica to possible life on Mars, Europa, and beyond. I endorse the editors' conclusion, 'It is a fascinating story.'"—David M. Karl, University of Hawaii

"This book represents the first time experts in the field—including some founders of the field, such as those from Russia—have come together in a single volume to discuss the topic of life in ancient ice."—Lloyd Burckle, Lamont-Doherty Earth Observatory, Columbia University

"This book does a good job of making a case for long-term survival of microorganisms and possible low-temperature metabolism in ice-bound cells. The papers represent a strong collection that illustrates the breadth of work that has been undertaken in this fascinating field in recent years by some of the top researchers in the field. The editors' opening and closing chapters draw together the threads of the contributions and point a way forward in cryosphere research."—Ian Hawes, National Institute of Water and Atmospheric Research, New Zealand