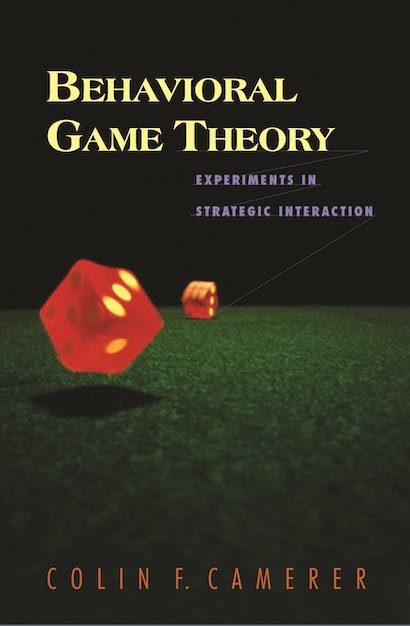 Game theory, the formalized study of strategy, began in the 1940s by asking how emotionless geniuses should play games, but ignored until recently how average people with emotions and limited foresight actually play games. This book marks the first substantial and authoritative effort to close this gap. Colin Camerer, one of the field’s leading figures, uses psychological principles and hundreds of experiments to develop mathematical theories of reciprocity, limited strategizing, and learning, which help predict what real people and companies do in strategic situations. Unifying a wealth of information from ongoing studies in strategic behavior, he takes the experimental science of behavioral economics a major step forward. He does so in lucid, friendly prose.


Behavioral game theory has three ingredients that come clearly into focus in this book: mathematical theories of how moral obligation and vengeance affect the way people bargain and trust each other; a theory of how limits in the brain constrain the number of steps of “I think he thinks …” reasoning people naturally do; and a theory of how people learn from experience to make better strategic decisions. Strategic interactions that can be explained by behavioral game theory include bargaining, games of bluffing as in sports and poker, strikes, how conventions help coordinate a joint activity, price competition and patent races, and building up reputations for trustworthiness or ruthlessness in business or life.


While there are many books on standard game theory that address the way ideally rational actors operate, Behavioral Game Theory stands alone in blending experimental evidence and psychology in a mathematical theory of normal strategic behavior. It is must reading for anyone who seeks a more complete understanding of strategic thinking, from professional economists to scholars and students of economics, management studies, psychology, political science, anthropology, and biology.

Colin F. Camerer is Rea A. and Lela G. Axline Professor of Business Economics at the California Institute of Technology. The author of numerous journal articles and book chapters, he teaches both cognitive psychology and economics.

"Colin Camerer's Behavioral Game Theory fills an important niche in the literature. It brings together and synthesizes a large body of experimental and theoretical work on multi-person interactions, in psychology as well as economics. The result is a theory of games enriched by empirical knowledge and significantly closer to what is needed for applications. Camerer's book will make an outstanding principal or supplementary text for graduate or advanced undergraduate courses in game theory and experimental economics."—Vincent Crawford, University of California, San Diego

"Behavioral economics has become very popular and of growing interest both within economics and in social science more generally. It integrates the rational maximizing behavior characteristic of economic models with objectives and beliefs characteristic of sociology and psychology in new and useful ways. Thus, it is increasingly relevant in framing issues such as tax policy, income redistribution, auctions, crime, and drug addiction. In this excellent and welcome work, Behavioral Game Theory, Colin Camerer brings his impressive breadth of knowledge to bear on the behavioral economics of strategic interaction, and thus on the field itself. This book will induce scholars, graduate students, and young social scientists alike to work in this burgeoning and exciting area of intellectual pursuit."—Herbert Gintis, University of Massachusetts and the Santa Fe Institute

"Colin Camerer's Behavioral Game Theory is a major achievement. Nothing like it is available thus far, and the author is uniquely qualified to have written it. He has an impressive understanding of both psychology and economics. He has taken the trouble to 'talk through' hundreds of tricky arguments that elsewhere just get stated mathematically. Rarer still is his positive attitude toward modeling, experimentation, econometrics, and other methodologies. If his book invests others with the same open-minded, synergistic outlook, that alone would make it worthwhile."—David G. Pearce, Yale University

"This is a terrific book. I cannot recommend it highly enough. In addition to its substantive findings, it contains a wealth of wise methodological insights, generously sprinkled with relevant and stimulating anecdotes."—Jon Elster, Columbia University

"Behavioral economics has won whatever intellectual war was fought. It has won in the sense that it has been shown to be superior to the conventional alternatives wherever there has been an evidentiary contest. In a deeper sense, however, there was no war-simply standard science, in which the current generation of scholars builds on and expands the work of previous generations. The work of implementing these advances has only begun. This book explains the nature of the advances to those in economics who were locked away in their workshops while the intellectual contest was being waged and may be unaware of what has happened."—Henry J. Aaron, The Brookings Institution

"It is certainly time that a book such as this be published. This volume will be a 'one-stop shop' for learning about behavioral economics and is likely to be adopted in graduate course in behavioral economics (and may even encourage people to offer such a course). The introductory chapter does a good job of explaining the enterprise, behavioral economics, and providing some history and context."—Linda Babcock, Carnegie Mellon University, coauthor of Women Don't Ask