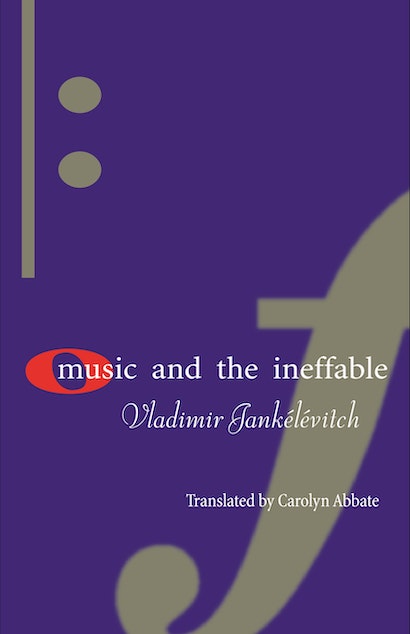 Vladimir Jankélévitch left behind a remarkable uvre steeped as much in philosophy as in music. His writings on moral quandaries reflect a lifelong devotion to music and performance, and, as a counterpoint, he wrote on music aesthetics and on modernist composers such as Fauré, Debussy, and Ravel. Music and the Ineffable brings together these two threads, the philosophical and the musical, as an extraordinary quintessence of his thought. Jankélévitch deals with classical issues in the philosophy of music, including metaphysics and ontology. These are a point of departure for a sustained examination and dismantling of the idea of musical hermeneutics in its conventional sense.


Music, Jankélévitch argues, is not a hieroglyph, not a language or sign system; nor does it express emotions, depict landscapes or cultures, or narrate. On the other hand, music cannot be imprisoned within the icy, morbid notion of pure structure or autonomous discourse. Yet if musical works are not a cipher awaiting the decoder, music is nonetheless entwined with human experience, and with the physical, material reality of music in performance. Music is “ineffable,” as Jankélévitch puts it, because it cannot be pinned down, and has a capacity to engender limitless resonance in several domains. Jankélévitch’s singular work on music was central to such figures as Roland Barthes and Catherine Clément, and the complex textures and rhythms of his lyrical prose sound a unique note, until recently seldom heard outside the francophone world.

Vladimir Jankélévitch (1903-1985), a critical figure in twentieth-century French philosophy, held the Chair in Moral Philosophy at the Sorbonne from 1951 to 1978. He was the author of more than twenty books on philosophy, as well as a number of books on music. Carolyn Abbate is Professor of Music at Princeton University. She is the author of In Search of Opera (Princeton) and the translator of Jean-Jaques Nattiez's Music and Discourse.

"Among significant influences in 20th-century philosophical thought on music, perhaps none is as sweeping as that of Vladimir Jankélévitch. Yet until now his works have not been widely available in English. . . . Still provocative after 40 years, this book offers fascinating, fresh, and Occasionally befuddling perspectives on the vital phenomenon that is music."—Choice

"Imagine! A philosopher who meditates on listening to music, not its ontology; who does not cast composers as heroes and villains; who does not expect music to prophesy the future, or tell us how to live, or solve our political problems; who is allergic to gassy Teutonic grandiloquence (indeed, to Germans tout court). Welcome the anti-Adorno; he has been too long coming to English. And thank Carolyn Abbate for bringing him to us in such excellent shape."—Richard Taruskin, Class of 1955 Professor of Music, University of California, Berkeley