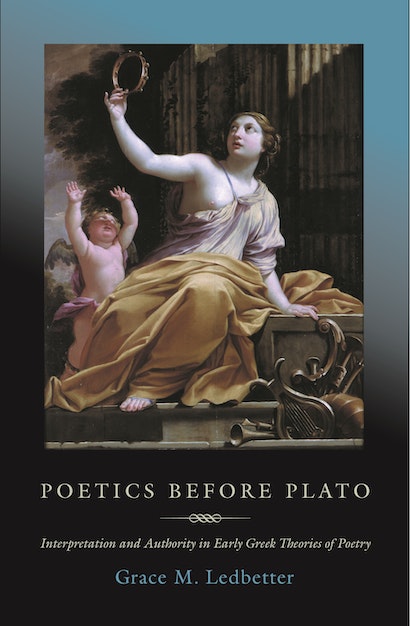 
Literary theory is usually said to begin with Plato’s famous critique of poetry in the Republic. Grace Ledbetter challenges this entrenched assumption by arguing that Plato’s earlier dialogues Ion, Protagoras, and Apology introduce a distinctively Socratic theory of poetry that responds polemically to traditional poets as rival theorists. Ledbetter tracks the sources of this Socratic response by introducing separate readings of the poetics implicit in the poetry of Homer, Hesiod, and Pindar. Examining these poets’ theories from a new angle that uncovers their literary, rhetorical, and political aims, she demonstrates their decisive influence on Socratic thinking about poetry.


The Socratic poetics Ledbetter elucidates focuses not on censorship, but on the interpretation of poetry as a source of moral wisdom. This philosophical approach to interpreting poetry stands at odds with the poets’ own theories — and with the Sophists’ treatment of poetry. Unlike the Republic’s focus on exposing and banishing poetry’s irrational and unavoidably corrupting influence, Socrates’ theory includes poetry as subject matter for philosophical inquiry within an examined life.


Reaching back into what has too long been considered literary theory’s prehistory, Ledbetter advances arguments that will redefine how classicists, philosophers, and literary theorists think about Plato’s poetics.

Grace M. Ledbetter is Associate Professor of Classics and Philosophy at Swarthmore College.

"Ledbetter's argument is original and will excite discussion."—Choice

"This is an excellent book that should change the ways in which we approach Plato's views on art, especially literature. Ledbetter unearths many riches as she places Socrates, and by implication Plato, in the context of what poets and other literary figures have said about the nature of poetry. Her book is highly original and strikes out along a new path."—Julius M. Moravcsik, Stanford University

"Ledbetter's views are bold and brilliantly argued. Her book solves some of the most critical and controversial problems in early Greek poetics."—Jenny Strauss Clay, University of Virginia