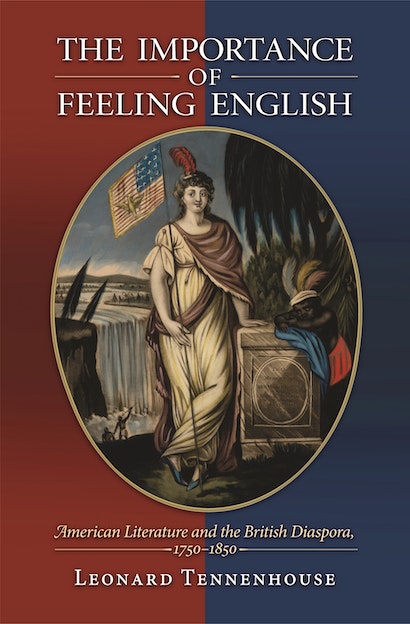 American literature is typically seen as something that inspired its own conception and that sprang into being as a cultural offshoot of America’s desire for national identity. But what of the vast precedent established by English literature, which was a major American import between 1750 and 1850?


In The Importance of Feeling English, Leonard Tennenhouse revisits the landscape of early American literature and radically revises its features. Using the concept of transatlantic circulation, he shows how some of the first American authors — from poets such as Timothy Dwight and Philip Freneau to novelists like William Hill Brown and Charles Brockden Brown — applied their newfound perspective to pre-existing British literary models. These American “re-writings” would in turn inspire native British authors such as Jane Austen and Horace Walpole to reconsider their own ideas of subject, household, and nation.


The enduring nature of these literary exchanges dramatically recasts early American literature as a literature of diaspora, Tennenhouse argues — and what made the settlers’ writings distinctly and indelibly American was precisely their insistence on reproducing Englishness, on making English identity portable and adaptable. Written in an incisive and illuminating style, The Importance of Feeling English reveals the complex roots of American literature, and shows how its transatlantic movement aided and abetted the modernization of Anglophone culture at large.

Leonard Tennenhouse is professor of English, comparative literature, and modern culture and media at Brown University. He is the author of Power on Display: The Politics of Shakespeare's Genres.

"Tennenhouse argues persuasively that the severance of political ties between London and the thirteen colonies did not provoke a . . . division in the cultural sphere. Americans continued to think of themselves as culturally English for a long time. [Tennenhouse] casts this rich and fascinating book [as] a contribution to the study of American literature, but it has much to say about English literature of the period. It deserves to be widely read on both sides of the Atlantic."—John D. Baird, Times Literary Supplement

"In revisiting the landscape of early American literature, The Importance of Feeling English radically revises its features. Tennenhouse focuses on the concept of transatlantic circulation and shows how some of the first American authors applied their perspective to existing British literary models."—Times Higher Education

"This important book has implications for a far wider account of cultural exchange than Tennenhouse himself focuses on here. . . . The Importance of Feeling English encourages additional consideration about the relationships among diasporic cultures, including Spanish and African, in frontiers far away from the Northeast, which might be more sensitive to spatial and regional differences in an expanding United States."—Spencer Snow, Common-place

"[T]here can be no doubt that Tennenhouse is correct in insisting that the American Revolution did not produce a clean break in some Americans' Anglophilia and that he offers an interesting and provocative account of American literary origins that are bound to generate further discussion."—Ralph Bauer, American Literary History

"The Importance of Feeling English asks important questions not only about the literature of the early United States but also about the pliability of diaspora theory. . . . Tennenhouse's book offers an important rethinking of American literary history that opens new avenues of inquiry and enables us to see the early republic with new eyes. It fundamentally shifts the ground of the conversation in ways that will almost certainly lead to the emergence of new models for thinking about both the movements of peoples through space and time and the specific case of the United States."—Edward Larkin, Diaspora

"What is greatly satisfying about The Importance of Feeling English is that it is a book that knows what it wants to do, and does it with uncommon adroitness; it articulates its goals clearly and briskly and then carries out its agenda with dispatch."—Christopher Looby, Early American Literature

"[T]he importance of becoming English can scarcely be overestimated, and The Importance of Feeling English gives us a conceptual model for understanding and estimating that importance accurately."—Christopher Looby, Early American Literature

"Tennenhouse's book makes an important contribution to expanding the circumference of the subject."—Paul Giles, Modern Philology

"This book challenges the very notion of 'American Literature'—what it is and how we date it—by daring not to assume 'that different national governments mean different national literatures.' It does so from a transatlantic perspective that, in Tennenhouse's hands, achieves a new maturity and power. In reconceiving American literature, The Importance of Feeling English also points the way to a new understanding of British literary history."—Clifford Siskin, New York University