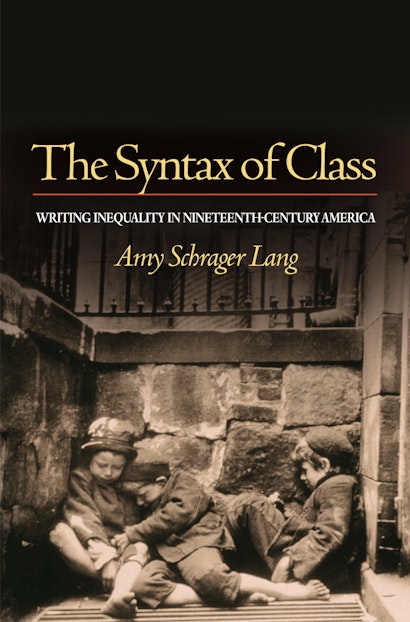 The Syntax of Class explores the literary expression of the crisis of social classification that occupied U.S. public discourse in the wake of the European revolutions of 1848. Lacking a native language for expressing class differences, American writers struggled to find social taxonomies able to capture — and manage — increasingly apparent inequalities of wealth and power.


As new social types emerged at midcentury and, with them, new narratives of success and failure, police and reformers alarmed the public with stories of the rise and proliferation of the “dangerous classes.” At the same time, novelists as different as Maria Cummins, Nathaniel Hawthorne, Frank Webb, Elizabeth Stuart Phelps, and Horatio Alger Jr. focused their attention on dense engagements across the lines of class. Turning to the middle-class idea of “home” as a figure for social harmony and to the lexicons of race and gender in their effort to devise a syntax for the representation of class, these writers worked to solve the puzzle of inequity in their putatively classless nation. This study charts the kaleidoscopic substitution of terms through which they rendered class distinctions and follows these renderings as they circulated in and through a wider cultural discourse about the dangers of class conflict.


This welcome book is a finely achieved study of the operation of class in nineteenth-century American fiction — and of its entanglements with the languages of race and gender.

Amy Schrager Lang teaches American Studies at Emory University. She is the author of Prophetic Woman: Anne Hutchinson and the Problem of Dissent in the Literature of New England.

"This is a tightly focused, original, and elegantly argued study of the operation of class in nineteenth-century U.S. fiction. It reveals for the first time a congeries of class-based relationships that have been, so to speak, hiding in plain sight. To read The Syntax of Class is to understand the great extent to which U.S. nineteenth-century fiction produced the hegemonic middle class within a context of debates over inequality."—Cecelia Tichi, Vanderbilt University

"Lang reveals how the ever-shifting problems of class identity in the United States can provide sophisticated structures for literary analysis. The result is an extremely well-written, solid, and sensitive work of literary and cultural history."—Gavin Jones, Stanford University