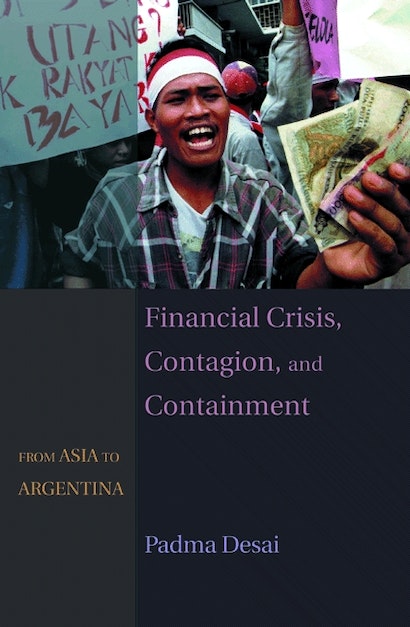 This book provides a sweeping, up-to-date, and boldly critical account of the financial crises that rocked East Asia and other parts of the world beginning with the collapse of the Thai baht in 1997. Retracing the story of Asia’s “Crisis Five” — Indonesia, Malaysia, South Korea, the Philippines, and Thailand — Padma Desai argues that the region’s imprudently fast-paced opening to the free flow of capital was pushed by determined advocates, official and private, in the global economy’s U.S.-led developed center. Turmoil ensued in these peripheral economies, the Russian ruble faltered, and Brazil was eventually hit. The inequitable center-periphery relationship also extended to the policy measures that the crisis-swept economies implemented under International Monetary Fund bailouts, which intensified the downturns induced by the panic-driven outflows of short-term capital.

Financial Crisis, Contagion, and Containment examines crisis origin and resolution in a comparative perspective by combing empirical evidence from the most robust economies to the least. Why is the U.S. relatively successful at weathering economic ups and downs? Why is Japan stuck in policy paralysis? Why is the European Central Bank unable to achieve both inflation control and stable growth? How can emerging markets avoid turbulence amid free-flowing speculative capital from private lenders of the developed center? Engaging and nontechnical yet deeply insightful, this book appears at a time when the continuing turmoil in Argentina has revived policy debates for avoiding and addressing financial crises in emerging market economies.

Padma Desai is Gladys and Roland Harriman Professor of Comparative Economic Systems and Director of the Center for Transition Economies at Columbia University. She was president of the Association for Comparative Economic Studies in 2001. She is author of The Soviet Economy and Perestroika in Perspective.

"The best book yet about the financial crises that have swept the world in recent years. Desai offers a comprehensive, critical survey that will unsettle ideologues right and left. This book is essential reading for anyone interested in the global economy."—Paul Krugman, Princeton University

"Padma Desai attacks head-on fundamental questions about the compatibility of small emerging country economies with inherently volatile global financial markets—questions that have too often been ignored or glossed over in the policy debate."—Paul Volcker, Former Chairman of the Federal Reserve

"Padma Desai's thorough and insightful analysis of the financial crises that have devastated many emerging market economies over the past several years is essential reading for anyone seeking to understand the downside of the global financial system. Her forceful policy recommendations deserve to be considered at the highest level."—George Soros

"Padma Desai's stimulating and path-breaking comparative analysis of the pace and sequencing of financial liberalization processes has profound implications for the planning of national policies and the structure of international financial cooperation. The book makes an outstanding contribution to our understanding of these complex issues, and to the designing of sensible proposals for rebuilding the international financial architecture."—Manmohan Singh, Former Finance Minister of India

"Professor Padma Desai has long stood as a voice for caution, pragmatism, and common sense against those who would impose untested economic models on economies in transition. In this book, she turns her attention to the central asymmetry of the world financial system: rich countries retain the privilege of managing their economies, while poor countries, having liberalized their financial markets prematurely, remain hostage to volatile capital flows, and when the inevitable crisis strikes, have to succumb to ill-fitting arrangements designed for them by the International Monetary Fund. This is a book that should be read widely."—Dani Rodrik, Harvard University

"This fascinating book presents an impressive epic on the financial crises that have afflicted a large portion of the world. While comparing alternative views for the remedy, it presents truly provocative criticisms on the IMF's former policy of trying to sustain free capital mobility for countries facing crisis. Based on the most informed knowledge of this subject but presented in a nontechnical form, with lucid descriptions of familiar crises, it will be appreciated by students and scholars as well as a broader intellectual audience."—Koichi Hamada, President, Economic and Social Research Institute, Cabinet Office of the Japanese Government