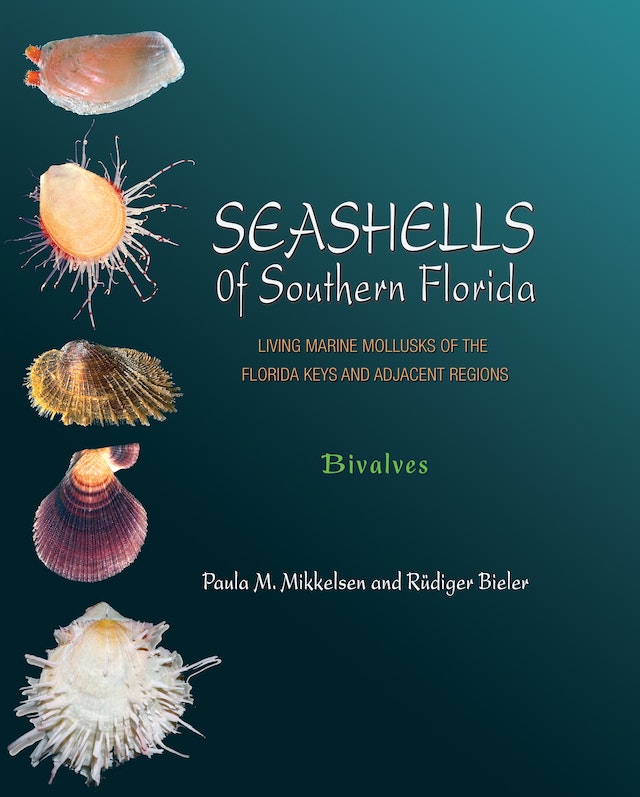 Located where the Atlantic Ocean, Gulf of Mexico, and Caribbean Sea converge, the Florida Keys are distinctive for their rich and varied marine fauna. The Keys are home to nearly sixty taxonomic families of bivalves such as clams and mussels — roughly half the world’s bivalve family diversity. The first in a series of three volumes on the molluscan fauna of the Keys and adjacent regions, Seashells of Southern Florida: Bivalves provides a comprehensive treatment of these bivalves, and also serves as a comparative anatomical guide to bivalve diversity worldwide.


Paula Mikkelsen and Rüdiger Bieler cover more than three hundred species of bivalves, including clams, scallops, oysters, mussels, shipworms, jewel boxes, tellins, and many lesser-known groups. For each family they select an exemplar species and illustrate its shell and anatomical features in detail. They describe habitat and other relevant information, and accompany each species account with high-resolution shell photographs of other family members. Text and images combine to present species — to family-level characteristics in a complete way never before seen. The book includes fifteen hundred mostly color photographs and images of shells, underwater habitats, bivalves in situ, original anatomical and hinge drawings, scanning electron micrographs, and unique transparent — shell illustrations with major organ systems color-coded and clearly shown. Seashells of Southern Florida: Bivalves is the most complete guide to subtropical bivalves available. It is an essential tool for students and teachers of molluscan diversity and systematics, and an indispensable identification guide for collectors, scuba divers, naturalists, environmental consultants, and natural-resource managers.

Paula M. Mikkelsen is a marine biologist and director of publications at the Paleontological Research Institution in Ithaca, New York. Rüdiger Bieler is an evolutionary biologist and curator of invertebrates at the Field Museum of Natural History in Chicago. They are the coauthors of Pearls: A Natural History.

"This handsome volume, the first of a projected three-volume work on the mollusks of the Florida Keys, sets an admirable precedent. Mikkelsen and Rudiger have probably created the best illustrated and most detailed of any marine identification work so far published...[T]his is an important reference work that belongs in the library of any institution that offers courses in marine biology."—J.C. Briggs, Choice

"All marine bivalve enthusiasts should purchase this book, regardless of their home port. The anatomical drawings, illustrated glossary and good photographs will be useful worldwide. In addition, I would strongly recommend this book to all malacologists and shell collectors. It just might entice them to take the plunge into the exciting, if not tumultuous, world of bivalve taxonomy."—Paul Valentich-Scott, The Festivus

"A tremendous resource for zoologists, ecologists, and any researchers in tropical marine systems. This book describes and illustrates in great detail the incredibly diverse bivalve mollusk fauna of the Florida Keys. The lushness of the color illustrations and photographs will encourage even reticent readers to delve deeper into the text. This work is significant and important."—Paul Valentich-Scott, coauthor of Bivalve Seashells of Western North America

"This book provides the most thorough treatment of living mollusks in this region ever written. It provides anatomical details of many species for which the anatomy had not been described previously. In addition to serving as an identification guide, it focuses on mollusks as living organisms, providing more biological information than previous faunal guides for western Atlantic marine mollusks."—Gary Rosenberg, Academy of Natural Sciences