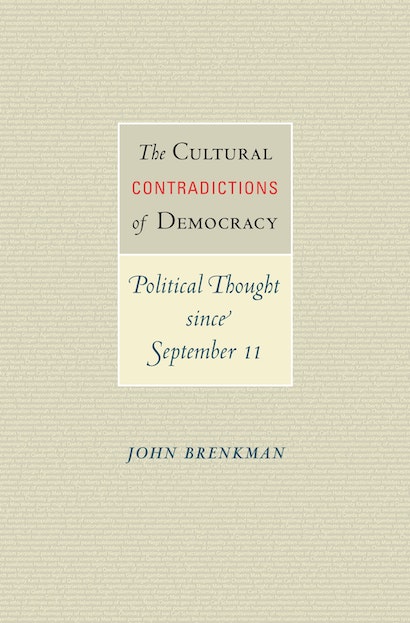 Since 9/11, American foreign policy has been guided by grand ideas like tyranny, democracy, and freedom. And yet the course of events has played havoc with the cherished assumptions of hawks and doves alike. The geo-civil war afflicting the Muslim world from Lebanon through Iraq and Afghanistan to Pakistan confronts the West with the need to articulate anew what its political ideas and ideals actually are. In The Cultural Contradictions of Democracy, John Brenkman dissects the rhetoric that has corrupted today’s political discourse and abused the idea of freedom and democracy in foreign affairs. Looking back to the original assumptions and contradictions that animate democratic thought, he attempts to resuscitate the language of liberty and give political debate a fresh basis amid the present global turmoil.

The Cultural Contradictions of Democracy picks apart the intellectual design and messianic ambitions of the neoconservative American foreign policy articulated by figures such as Robert Kagan and Paul Berman; it casts the same critical eye on a wide range of liberal and leftist thinkers, including Noam Chomsky and Jürgen Habermas, and probes the severe crisis that afflicts progressive political thought. Brenkman draws on the contrary visions of Hobbes, Kant, Max Weber, Hannah Arendt, and Isaiah Berlin in order to disclose the new contours of conflict in the age of geo-civil war, and to illuminate the challenges and risks of contemporary democracy.

John Brenkman is distinguished professor at the City University of New York and director of the U.S.-Europe Seminar at Baruch College. He has published widely on culture and political theory. He lives in New York and Paris.

"Philosophers and policy experts often look for answers by drawing strong conceptual oppositions. The Cultural Contradictions of Democracy, however, shows the shared dilemmas of writers who may themselves think they have nothing in common. This book-length essay tries to make sense of these philosophical and political contradictions by seeing them as necessary tensions in our attempts to reconcile competing values. For Brenkman, the contradictions of our political discourse reveal aspirations for freedom and democracy, for liberty and community. When we strive for freedom, we must learn to live with contradictions...Brenkman is that rare academic who can write well about both contemporary political practice and theory. His description of how the Bush administration was seized by power is insightful, and his critique of contemporary theory star Giorgio Agamben is concise and compelling."—Michael Roth, San Francisco Chronicle

"This book rightly calls for more responsibility in political decision-making and, despite the postnational moment, for a better understanding of what makes a nation-state successful and sustainable. . . . [It is] informed and rigorous in exposing the emotional and symbolic substrate of political life."—Georgiana Banita, American Literary History

"Brenkman's book is a fascinating read. His sophisticated analysis—situated in a deep understanding of political philosophy—of what democracy and freedom mean for the United States and the West against the backdrop of the 'global war on terror' and the invasion of Iraq provides compelling insight into both domestic and foreign policy. Brenkman's compelling work will surely raise the level of debate about these issues in the United States and Europe."—Steven A. Cook, Council on Foreign Relations

"In this fine book, John Brenkman tells us the story of the nefarious marriage of fear and hubris in post-September 11 U.S. international and domestic politics. In a lucid and powerful language, Brenkman makes an original contribution to political theory. He reminds us of the fragility of democracy, of how easily political creativity can turn against itself and become an agent of destruction, rather than a foundation and consolidation of civil life."—Nadia Urbinati, Columbia University

"This brilliant essay on post-9/11 political thought tackles democracy's inherent contradictions: civic and liberal freedom, U.S. domestic and foreign policy, human rights and civil rights, and cosmopolitanism and liberal nationalism. Brenkman puts into play Kant and Hobbes's divergent political visions of sovereignty and human nature, Arendt and Berlin's reflections on positive and negative freedom, and Habermas and Schmitt's thoughts on law and human rights. In doing so, he opens up new and surprising spaces of reflection on the challenges confronting democracy in the United States, the European Union, and the Islamic world today. His concluding chapter on the ordeal of universalism is, moreover, the most compelling treatment of the subject I have read in a long time."—Andreas Huyssen, Columbia University

"John Brenkman's The Cultural Contradictions of Democracy is a powerful intervention into the most important political questions of our time. He deliberates over the political thought that has emerged from within the fog of war, and he produces a series of clarifying 'untimely meditations' that probe the drama of political thought in the face of the war on terror, the overthrow of Saddam Hussein, and the occupation of Iraq."—Donald Pease, Dartmouth College