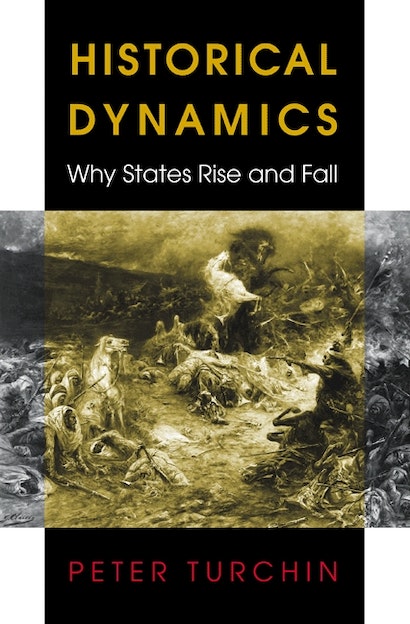 Many historical processes are dynamic. Populations grow and decline. Empires expand and collapse. Religions spread and wither. Natural scientists have made great strides in understanding dynamical processes in the physical and biological worlds using a synthetic approach that combines mathematical modeling with statistical analyses. Taking up the problem of territorial dynamics — why some polities at certain times expand and at other times contract — this book shows that a similar research program can advance our understanding of dynamical processes in history.


Peter Turchin develops hypotheses from a wide range of social, political, economic, and demographic factors: geopolitics, factors affecting collective solidarity, dynamics of ethnic assimilation/religious conversion, and the interaction between population dynamics and sociopolitical stability. He then translates these into a spectrum of mathematical models, investigates the dynamics predicted by the models, and contrasts model predictions with empirical patterns. Turchin’s highly instructive empirical tests demonstrate that certain models predict empirical patterns with a very high degree of accuracy. For instance, one model accounts for the recurrent waves of state breakdown in medieval and early modern Europe. And historical data confirm that ethno-nationalist solidarity produces an aggressively expansive state under certain conditions (such as in locations where imperial frontiers coincide with religious divides). The strength of Turchin’s results suggests that the synthetic approach he advocates can significantly improve our understanding of historical dynamics.

Peter Turchin is Professor of Ecology and Evolutionary Biology at the University of Connecticut. He is the author of Quantitative Analysis of Movement and Complex Population Dynamics (Princeton).

"This book is clearly the state of the art in formal modeling and computer simulation of long-term historical changes in territorial states. Elegantly formulated and clearly written, it takes an important topic to a new level of formal sophistication."—Randall Collins, University of Pennsylvania