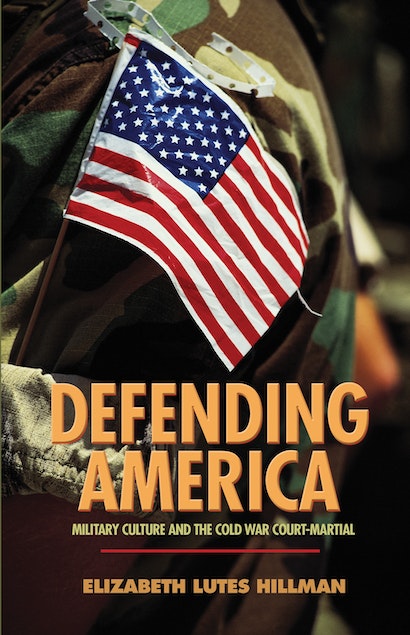 From going AWOL to collaborating with communists, assaulting fellow servicemen to marrying without permission, military crime during the Cold War offers a telling glimpse into a military undergoing a demographic and legal transformation. The post-World War II American military, newly permanent, populated by draftees as well as volunteers, and asked to fight communism around the world, was also the subject of a major criminal justice reform. By examining the Cold War court-martial, Defending America opens a new window on conflicts that divided America at the time, such as the competing demands of work and family and the tension between individual rights and social conformity.


Using military justice records, Elizabeth Lutes Hillman demonstrates the criminal consequences of the military’s violent mission, ideological goals, fear of homosexuality, and attitude toward racial, gender, and class difference. The records also show that only the most inept, unfortunate, and impolitic of misbehaving service members were likely to be prosecuted. Young, poor, low-ranking, and nonwhite servicemen bore a disproportionate burden in the military’s enforcement of crime, and gay men and lesbians paid the price for the armed forces’ official hostility toward homosexuality. While the U.S. military fought to defend the Constitution, the Cold War court-martial punished those who wavered from accepted political convictions, sexual behavior, and social conventions, threatening the very rights of due process and free expression the Constitution promised.

Elizabeth Lutes Hillman is Associate Professor of Law at Rutgers School of Law, Camden. A veteran of the United States armed forces, she previously taught history at the United States Air Force Academy and at Yale University.

"With Defending America, Elizabeth Hillman confirms her place as one of the preeminent military law and history scholars of her generation. Her book could not be more timely as the scale and tempo of American military operations increase. Clearly written and accessible to the general reader as well as specialists, it will help us better understand the surprising array of military justice controversies that have arisen in recent years, including those that continue to emerge as a result of the war in Iraq, as well as place them in context with developments during the formative Cold War years. Professor Hillman has tapped a valuable mass of case law and organized it in a new and thought-provoking way. Three cheers."—Eugene R. Fidell, President, National Institute of Military Justice

"Defending America is a splendid piece of work. Hillman writes with style and wit and makes a compelling case for the importance of her subject. Everyone working on the Cold War, on military history, and in particular on the legal history of the period, will need to read this book."—Marilyn B. Young, New York University, author of The Vietnam Wars, 1945-1990

"This innovative and well-researched book moves the reader through twenty-two years of U.S. military law and justice. It is a significant contribution to our understanding of military culture at a moment when military justice has become especially visible and debated. In Hillman's skillful hands military courts-martial become a vehicle through which to explore the changing relation of the military to a broader American culture—a culture emerging from one hot global war and facing a much longer and infinitely more complex cold war. Hillman admirably illuminates the ways in which gender, race, class, and sexual ideologies inflected the implementation and execution of military law."—Leisa D. Meyer, College of William and Mary