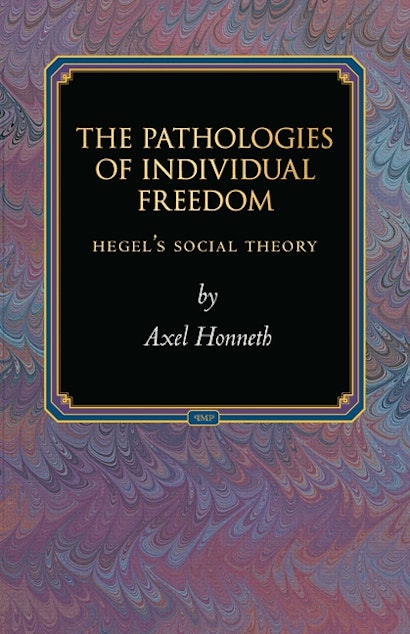 This is a penetrating reinterpretation and defense of Hegel’s social theory as an alternative to reigning liberal notions of social justice. The eminent German philosopher Axel Honneth rereads Hegel’s Philosophy of Right to show how it diagnoses the pathologies of the overcommitment to individual freedom that Honneth says underlies the ideas of Rawls and Habermas alike. Honneth argues that Hegel’s theory contains an account of the psychological damage caused by placing too much emphasis on personal and moral freedom. Although these freedoms are crucial to the achievement of justice, they are insufficient and in themselves leave people vulnerable to loneliness, emptiness, and depression. Hegel argues that people must also find their freedom or “self-realization” through shared projects. Such projects involve the three institutions of ethical life — family, civil society, and the state — and provide the arena of a crucial third kind of freedom, which Honneth calls “communicative” freedom. A society is just only if it gives all of its members sufficient and equal opportunity to realize communicative freedom as well as personal and moral freedom.

Axel Honneth is professor of social philosophy at Goethe University and director of the Institute for Social Research in Frankfurt am Main. His many books include Pathologies of Reason, Reification, The Struggle for Recognition, and The Critique of Power.

"Axel Honneth's book is stimulating, insightful, philosophically interesting, and analytically sophisticated. Its main contribution lies in its sympathetic, philosophically acute reconstruction of Hegel's position on individual freedom, which is made with an eye to lending it contemporary relevance. The book succeeds admirably and makes a great contribution to the English-language literature on Hegel."—Fred Neuhouser, Barnard College