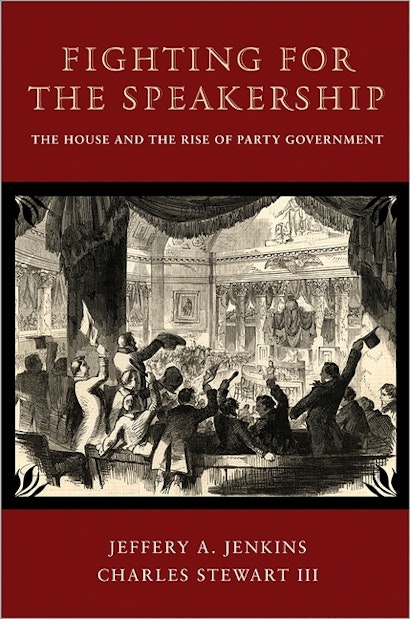 The Speaker of the House of Representatives is the most powerful partisan figure in the contemporary U.S. Congress. How this came to be, and how the majority party in the House has made control of the speakership a routine matter, is far from straightforward. Fighting for the Speakership provides a comprehensive history of how Speakers have been elected in the U.S. House since 1789, arguing that the organizational politics of these elections were critical to the construction of mass political parties in America and laid the groundwork for the role they play in setting the agenda of Congress today.


Jeffery Jenkins and Charles Stewart show how the speakership began as a relatively weak office, and how votes for Speaker prior to the Civil War often favored regional interests over party loyalty. While struggle, contention, and deadlock over House organization were common in the antebellum era, such instability vanished with the outbreak of war, as the majority party became an “organizational cartel” capable of controlling with certainty the selection of the Speaker and other key House officers. This organizational cartel has survived Gilded Age partisan strife, Progressive Era challenge, and conservative coalition politics to guide speakership elections through the present day. Fighting for the Speakership reveals how struggles over House organization prior to the Civil War were among the most consequential turning points in American political history.

Jeffery A. Jenkins is associate professor of politics at the University of Virginia. Charles Stewart III is the Kenan Sahin Distinguished Professor of Political Science at the Massachusetts Institute of Technology.

"An excellent look at the history of majority party leadership in the House."—Choice

"The Speaker of the House is the third-highest constitutional office in the United States. Yet political scientists and historians have largely ignored how the House chooses the holder of this exalted position. No longer—Jenkins and Stewart have convincingly placed the contest for the speakership at the center of the historical development of Congress."—Nolan McCarty, Princeton University

"The development of an 'organizational cartel' has been central to the evolution of political parties in the U.S. House. The parties control access to committee and leadership slots. Whether this has allowed parties to control policy is a separate and contingent matter. Jenkins and Stewart press this theoretical distinction and offer much else in this excellent and authoritative work of congressional history."—David Mayhew, Yale University

"This is an ambitious and impressive piece of scholarship with extraordinary historical sweep. Urging scholars to move beyond the study of the majority party's procedural control of the agenda, Jenkins and Stewart grapple with the organizational evolution of the House and the starring role ultimately played in that institutional drama by the majority party caucus. This is a must-read for students of Congress and America's political development."—Sarah Binder, George Washington University and the Brookings Institution

"Fighting for the Speakership makes a new and important contribution to our knowledge of the role of speakership contests in the development of party organization in the House of Representatives. Most previous scholarship begins with the observation that majority parties firmly control the House's top organizational positions. Jenkins and Stewart show that this was not always the case."—Steven S. Smith, author of Party Influence in Congress