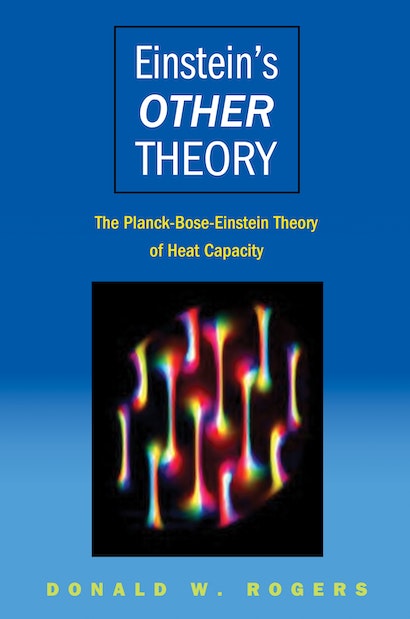 Einstein’s theories of relativity piqued public curiosity more than any other mathematical concepts since the time of Isaac Newton. Scientists and non-scientists alike struggled, not so much to grasp as to believe the weird predictions of relativity theory — shrinking space ships, bending light beams, and the like. People all over the world watched with fascination as Einstein’s predictions were relentlessly and unequivocally verified by a hundred experiments and astronomical observations.


In the last decade of the twentieth-century, another of Einstein’s theories has produced results that are every bit as startling as the space-time contractions of relativity theory. This book addresses his other great theory, that of heat capacity and the Bose-Einstein condensate. In doing so, it traces the history of radiation and heat capacity theory from the mid-19th century to the present. It describes early attempts to understand heat and light radiation and proceeds through the theory of the heat capacity of solids. It arrives at the theory of superconductivity and superfluidity — the astonishing property of some liquids to crawl spontaneously up and out of their containers, and the ability of some gases to cause light to pause and take a moment’s rest from its inexorable flight forward in time. Couched in the terminology of traditional physical chemistry, this book is accessible to chemists, engineers, materials scientists, mathematicians, mathematical biologists, indeed to anyone with a command of first-year calculus. In course work, it is a collateral text to third semester or advanced physical chemistry, introductory statistical mechanics, statistical thermodynamics, or introductory quantum chemistry. The book connects with mainstream physical chemistry by treating boson and fermion influences in molecular spectroscopy, statistical thermodynamics, molecular energetics, entropy, heat capacities (especially of metals), superconductivity, and superfluidity.

Donald W. Rogers is Professor Emeritus at Long Island University. He has published in the Journal of Physical Chemistry, the Journal of The American Chemical Society, and elsewhere. His research in quantum thermodynamics is currently supported by the National Science Foundation through the National Center for Supercomputing Applications.

"It is rarely remembered in popular science circles that Einstein did much basic work on Brownian motion, produced a theory of solid-state heat capacities, and combined with the Indian physicist Satyendranath Bose to produce the so-called Bose-Einstein statistics as well. This book aims to examine these topics, apart from Brownian motion, in conjunction with Planck's contribution to the theory of black-body radiation. . . . This book [is] . . . highly recommended."—Jeremy Dunning-Davies, Chemistry World

"[T]he one point that [this book] makes about Einstein is a significant one: that his contributions to quantum mechanics, and particularly to quantum statistical mechanics, are arguably at least as revolutionary as those he made via his much more famous relativity theory."—Philip Anderson, Times Higher Education Supplement

"I am enthusiastic about this book. It treats a standard topic for chemistry graduate students from a unique perspective in which one learns about the basics of statistical mechanics while at the same time seeing the history of how this topic developed and how the 'discovery process' works."—George C. Schatz, Morrison Professor of Chemistry, Northwestern University

"This book is a significant contribution to the field. It will be a worthwhile addition to the literature of physical chemistry, and potentially useful to many whose work, though perhaps in another field, requires a strong physical chemistry basis."—Norman L. Allinger, Research Professor Emeritus, Department of Chemistry, Long Island University