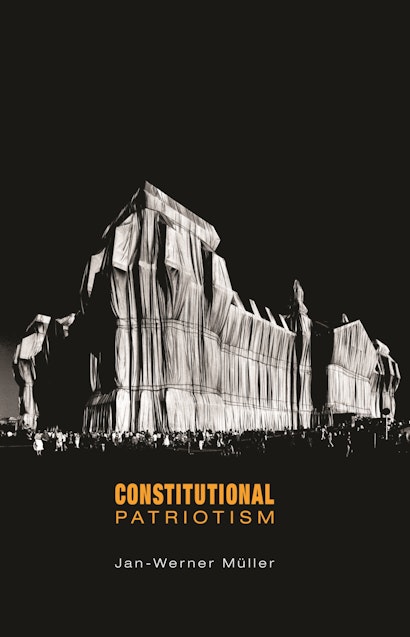 Constitutional Patriotism offers a new theory of citizenship and civic allegiance for today’s culturally diverse liberal democracies. Rejecting conventional accounts of liberal nationalism and cosmopolitanism, Jan-Werner Müller argues for a form of political belonging centered on universalist norms, adapted for specific constitutional cultures. At the same time, he presents a novel approach to thinking about political belonging and the preconditions of democratic legitimacy beyond the nation-state. The book takes the development of the European Union as a case study, but its lessons apply also to the United States and other parts of the world.


Müller’s essay starts with an engaging historical account of the origins and spread of the concept of constitutional patriotism-the idea that political attachment ought to center on the norms and values of a liberal democratic constitution rather than a national culture or the “global human community.” In a more analytical part, he then proposes a critical conception of citizenship that makes room for dissent and civil disobedience while taking seriously a polity’s need for stability over time. Müller’s theory of constitutional patriotism responds to the challenges of the de facto multiculturalism of today’s states — with a number of concrete policy implications about immigration and the preconditions for citizenship clearly spelled out. And it asks what civic empowerment could mean in a globalizing world.

Jan-Werner Müller teaches politics at Princeton University. He is the author of A Dangerous Mind: Carl Schmitt in Post-War European Thought and Another Country: German Intellectuals, Unification and National Identity. He regularly contributes to a number of major European newspapers and magazines.

"Is it possible to develop a 'patriotic' attachment to what is basically a set of intellectual positions? This is the question Müller attempts to answer in this short, bracing book. His analysis is centered on the Federal Republic of Germany, a government deliberately designed to eliminate the need to be 'German' in order to be a German citizen. . . . What can be learned from this experience can, Müller hopes, be brought to bear on similar problems facing the newborn EU. A clearly written, thoughtful, and enjoyable analysis."—M. Berheide, Berea College, for, Choice

"In Constitutional Patriotism, Werner Müller, who teaches politics at Princeton, has provided a thorough and engaging defense of the concept."—Michael Lind, American Prospect

"[T]his is an interesting and thoughtful book. There are many open ended arguments and some gaps (for me the ambiguity of theoretical republicanism loomed large), however, overall it is be welcomed as a valuable contribution to current political theory."—Andrew Vincent, Nations and Nationalism

"I do not know a more precise or more careful account of the political and intellectual-historical context in which the debate about constitutional patriotism unfolded initially. Above all Jan-Werner Müller offers a masterful interpretation of this important concept, which clarifies many misunderstandings."—Jürgen Habermas

"Jan-Werner Müller provides a wonderfully lucid (and for the American reader absolutely necessary) account of the German history of 'constitutional patriotism,' and then he develops and applies this important idea to the circumstances of the European Union. He asks us to imagine a mode of attachment to 'Europe' based not on blood or faith but on civic engagement, democratic decision making, and the appropriation and critique of a common (and sometimes not so common) history. This is exemplary political theory: an argument about things that matter here and now."—Michael Walzer, Institute for Advanced Study

"How can 'political space' catch up with the ever-widening economic space in our era of accelerating globalization? Will Europe be able to show us the way to a political community that does not require antagonism towards the 'other' to foster cohesion and acquire legitimacy? Jan-Werner Müller's analysis and ideas are central to the great debates of our time."—Kemal Dervis, chair of the United Nations Development Group

"Given currency by Jürgen Habermas in the late l980s, 'constitutional patriotism' has emerged as an appealing principle for post-national political allegiance. Jan-Werner Müller traces the long postwar history of the concept, takes honest account of the conservative critiques it has provoked, but proposes that it can serve as a robust norm for European Union citizenship. This is a profound meditation with real importance for contemporary political society."—Charles S. Maier, Harvard University

"Constitutional Patriotism provides the most thorough and insightful discussion available on the subject of constitutional patriotism. One of its major achievements is to help us assess the strengths and weaknesses of different recent approaches to social cohesion."—Glyn Morgan, Harvard University

"This book stands alone in clarifying the idea of constitutional patriotism analytically and historically while also linking it to debates about forms of solidarity in the European Union. What I especially like is the form of constitutional patriotism the book ends up endorsing for the EU—a 'thin' form with an emphasis on political morality and a commitment to public argument rather than memory and militancy."—Joshua Cohen, Stanford University