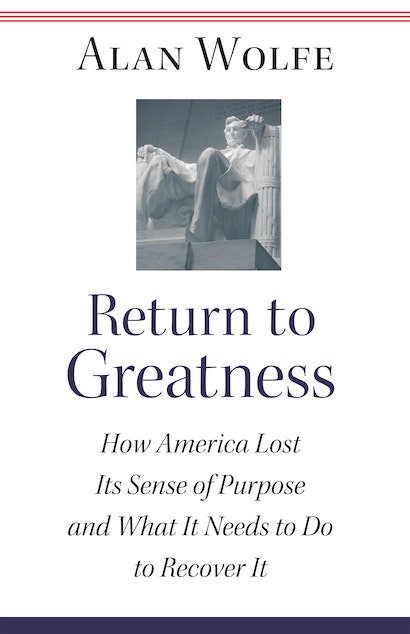 Has America, in its quest for goodness, sacrificed its sense of greatness? In this sharp-witted, historically informed book, veteran political observer Alan Wolfe argues that most Americans show greater concern with saving the country’s soul than with making the nation great.


Wolfe castigates both conservatives and liberals for opting for small-mindedness over greatness. Liberals, who at their best insisted on policies of national solidarity, have convinced themselves that small is beautiful, prefer multiculturalism to one nation, and are mistrustful of executive political power. Conservatives, who once embraced strong, active central government and an ideal of national citizenship, now support huge tax cuts that undermine America’s future ability to undertake any ambitious, long-term project at home or abroad.


No great society, in Wolfe’s view, has ever been built on the cheap. Wolfe notes that neither the conservatives’ call for small-scale faith-based initiatives nor the recent embrace on the left of a grassroots “civil society” can provide health care to tens of millions of uninsured Americans or ensure national security in an age of terrorism.


To find better solutions, Wolfe looks back at specific moments in our national experience, when, in the face of sharp resistance, aspirations for the idea of national greatness shaped American history. He demonstrates how a bold and ambitious political agenda, championed at various times by Alexander Hamilton, John Marshall, Abraham Lincoln, and the two Roosevelts, steered the country toward periods of national strength and unity.


Steeped in a colorful, panoramic reading of history, Return to Greatness offers a fresh take on American national identity and purpose. A call to action for a renewed embrace of the ideal of an activist federal government and bold policy agendas, it is sure to become a centerpiece of national debate.

Alan Wolfe is Professor of Political Science and Director of the Boisi Center for Religion and American Public Life at Boston College. His books include The Transformation of American Religion: How We Actually Practice Our Faith (Free Press), An Intellectual in Public, and One Nation, After All (Penguin-Viking).

"Wolfe argues that America's history has been a long struggle between a few Roosevelts and Lincolns who have challenged America to be great, and a swarm of Bushes and McKinleys who aimed low and achieved even less. . . . Nations, like heroes, are made, not born. As Alan Wolfe points out, our greatest presidents have always found the courage to remind us of responsibilities we might otherwise pass by, and tapped the latent greatness that is imprinted in the American character."—Bruce Reed, Washington Monthly

"Return to Greatness ranges, despite its brevity, over wide swaths of intellectual terrain, dispensing insights and making novel connections. . . . Wolfe deserves respect for reaffirming the promise of liberalism and for placing hope in the possibility of restoring common dreams."—David Greenberg, American Prospect

"In this fascinating and discerning reflection on America's frustrated instinct for greatness, Alan Wolfe suggests the formula and the elements necessary to make our nation the leader of an international community that shares our gifts of liberty, equality, and prosperity."—Mario M. Cuomo, former Governor of New York State

"This is Alan Wolfe at his best. Insightful, articulate, concise, slightly contentious, and thought provoking. Wolfe moves smoothly from key interpretations of Andrew Jackson . . . to savvy observations about President Bush and concerns about Iraq. The book offers a strong, original argument about American culture and politics."—Robert Wuthnow, Princeton University

"This is a timely book that will make a lasting contribution to our understanding of the present political and cultural moment. It is a call to arms for liberals to embrace a new vital center that rejects both knee-jerk flag-waving and rigid antinationalism."—Richard Wightman Fox, University of Southern California

"Every few years Alan Wolfe writes a book that changes the way we think about the political and social world. This book is provocative and original—another Wolfe classic."—Kathleen Hall Jamieson, University of Pennsylvania

"In this timely contribution to the literature of American identity and public policy post-9/11, Wolfe argues that Americans both right and left lack sufficient ambition to rebuild America's greatness."—Publishers Weekly