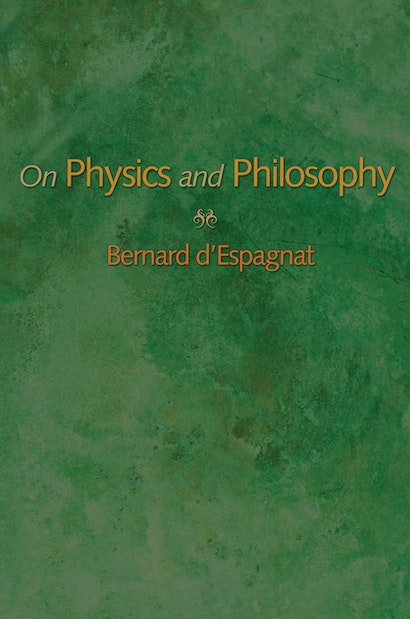 Among the great ironies of quantum mechanics is not only that its conceptual foundations seem strange even to the physicists who use it, but that philosophers have largely ignored it. Here, Bernard d’Espagnat argues that quantum physics — by casting doubts on once hallowed concepts such as space, material objects, and causality-demands serious reconsideration of most of traditional philosophy.

On Physics and Philosophy is an accessible, mathematics-free reflection on the philosophical meaning of the quantum revolution, by one of the world’s leading authorities on the subject. D’Espagnat presents an objective account of the main guiding principles of contemporary physics-in particular, quantum mechanics-followed by a look at just what consequences these should imply for philosophical thinking.


The author begins by describing recent discoveries in quantum physics such as nonseparability, and explicating the significance of contemporary developments such as decoherence. Then he proceeds to set various philosophical theories of knowledge — such as materialism, realism, Kantism, and neo-Kantism — against the conceptual problems quantum theory raises. His overall conclusion is that while the physical implications of quantum theory suggest that scientific knowledge will never truly describe mind-independent reality, the notion of such an ultimate reality — one we can never access directly or rationally and which he calls “veiled reality” — remains conceptually necessary nonetheless.

Bernard d'Espagnat is professor emeritus of physics at the University of Paris-Orsay, where he was director of the Laboratory of Theoretical Physics and Elementary Particles from 1970 to 1987, and winner of the 2009 Templeton Prize. His books include the classic Conceptual Foundations of Quantum Mechanics and Veiled Reality.

"This book is a monument to d'Espagnat's excellent work and style; it is surely the most complete book to have been written on this subject and one likely to last a long time, at least until we come to fully understand the remaining mysteries in the field."—Roland Omnès, Professor Emeritus of Theoretical Physics, Université de Paris-Sud

"Bernard d'Espagnat is an accomplished theoretical physicist and philosopher, whose two disciplines are interrelated in the present book. He conclusively argues that features of quantum mechanics—particularly the Uncertainty Principle, the nonlocality exhibited by entangled systems, and the measurement problem—revolutionize epistemology and metaphysics. His novel and lucid philosophy, called 'veiled realism,' criticizes Kant's doctrine of synthetic a priori knowledge but shares the thesis that scientific knowledge provides empirical regularities while pointing to an underlying 'noumenal' reality whose structure is not revealed."—Abner Shimony, Professor Emeritus of Philosophy and Physics, Boston University

"With exceptional scientific, historical, and philosophical insights, d'Espagnat examines the implications of recent developments in quantum physics for philosophy and the implications of philosophical reflections for the understanding of fundamental physics. D'Espagnat's book not only challenges ingrained ways of thinking; it is indeed a visionary and critical reorientation for both physics and philosophy."—Tian Yu Cao, Boston University

"D'Espagnat has performed an intellectual feat by distilling the essential conceptual puzzles of quantum mechanics into a few core principles without relying on any mathematical formalism, and in a very readable style at that. At the same time, this book is not some trendy everyman's guide to the exotic features of quantum physics, with some philosophical commentary—but a work of mature scholarship."—Jeffrey Bub, University of Maryland, author of Interpreting the Quantum World

"Here, d'Espagnat discusses virtually all the central philosophical issues related to quantum mechanics and its interpretation. The book is nontechnical, presupposing no previous knowledge of science or philosophy. It is a pleasure to read."—Andrew Z. Wayne, University of Guelph, coeditor of Ontological Aspects of Quantum Field Theory

"This book takes the theme of d'Espagnat's influential Veiled Reality and develops it into a 'world view,' as he calls it. This extensive treatment is rich in detailed arguments, deft rebuttal of rival viewpoints, and historical perspectives."—Arthur G. Zajonc, Amherst College, coauthor of The Quantum Challenge