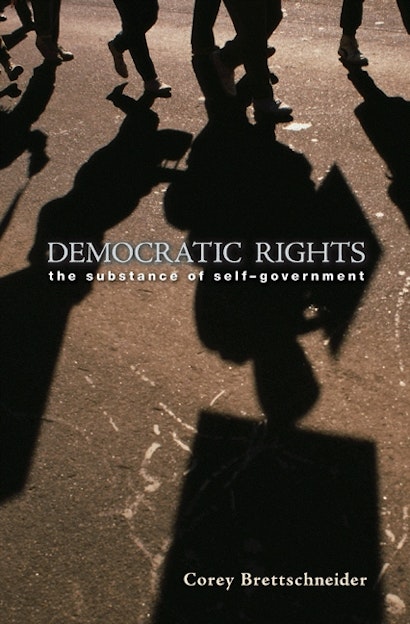 When the Supreme Court in 2003 struck down a Texas law prohibiting homosexual sodomy, it cited the right to privacy based on the guarantee of “substantive due process” embodied by the Constitution. But did the court act undemocratically by overriding the rights of the majority of voters in Texas? Scholars often point to such cases as exposing a fundamental tension between the democratic principle of majority rule and the liberal concern to protect individual rights. Democratic Rights challenges this view by showing that, in fact, democracy demands many of these rights.


Corey Brettschneider argues that ideal democracy is comprised of three core values — political autonomy, equality of interests, and reciprocity — with both procedural and substantive implications. These values entitle citizens not only to procedural rights of participation (e.g., electing representatives) but also to substantive rights that a “pure procedural” democracy might not protect. What are often seen as distinctly liberal substantive rights to privacy, property, and welfare can, then, be understood within what Brettschneider terms a “value theory of democracy.” Drawing on the work of John Rawls and deliberative democrats such as Jürgen Habermas, he demonstrates that such rights are essential components of — rather than constraints on — an ideal democracy. Thus, while defenders of the democratic ideal rightly seek the power of all to participate, they should also demand the rights that are the substance of self-government.

"[B]rettschneider has produced an innovative, imaginative new perspective on judicial review. He makes a persuasive case that democracy itself demands the legal recognition of certain substantive rights....[N]o one interested in rights or democratic theory can afford to ignore this book."—A.D. Sarat, Choice

"Democratic Rights is not only ambitious but distinctive . . . and marked by virtues that one does not always find in such books, being clearly written, carefully argued, and admirably concise. It is a book, in short, that is well worth the attention of democratic theorists and anyone who wants to know how far contractualism can take us in political and legal philosophy."—Richard Dagger, Criminal Law and Philosophy

"No problem of democratic theory is more formidable than how to reconcile majority rule with respect for individual rights. Democratic Rights is an original and compelling contribution to this debate—one that will affect the course of democratic theory for years to come. Among its most provocative and ingenious arguments is its case for the illegitimacy of the death penalty and the political parity of property and welfare rights under a democratic constitution. The prose is a model of compact lucidity."—Eamonn Callan, Stanford University

"First-rate. In a consistently accessible style, Corey Brettschneider presents a clear, innovative argument that he sustains in an elegant and economical way throughout."—Simone Chambers, University of Toronto

"This ambitious book establishes its author as a scholar setting out a distinctive and credible position within liberal democratic theory. Clear and accessible, it reaches eminently reasonable conclusions on a range of policy issues, and develops a theoretical structure that can be used to apply the author's recommended 'middle course' (between 'pure proceduralist' democrats and 'nondemocratic' liberals) directly to constitutional law and matters of basic justice."—Leif Wenar, University of Sheffield