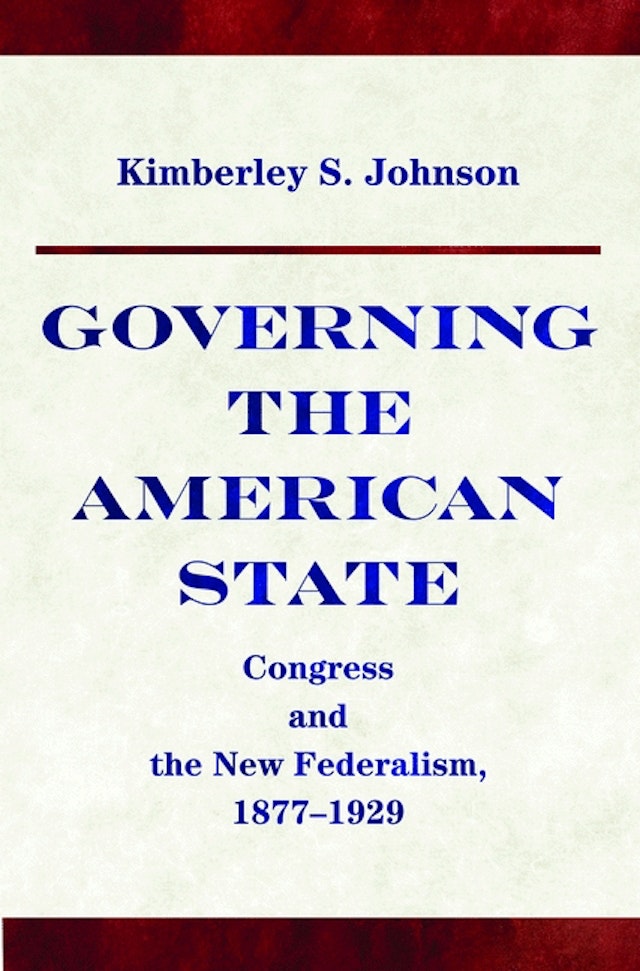 The modern, centralized American state was supposedly born in the Great Depression of the 1930s. Kimberley S. Johnson argues that this conventional wisdom is wrong. Cooperative federalism was not born in a Big Bang, but instead emerged out of power struggles within the nation’s major political institutions during the late nineteenth and early twentieth centuries.

Examining the fifty-two years from the end of Reconstruction to the beginning of the Great Depression, Johnson shows that the “first New Federalism” was created during this era from dozens of policy initiatives enacted by a modernizing Congress. The expansion of national power took the shape of policy instruments that reflected the constraints imposed by the national courts and the Constitution, but that also satisfied emergent policy coalitions of interest groups, local actors, bureaucrats, and members of Congress.

Thus, argues Johnson, the New Deal was not a decisive break with the past, but rather a superstructure built on a foundation that emerged during the Gilded Age and the Progressive Era. Her evidence draws on an analysis of 131 national programs enacted between 1877 and 1930, a statistical analysis of these programs, and detailed case studies of three of them: the Federal Highway Act of 1916, the Food and Drug Act of 1906, and the Sheppard-Towner Act of 1921. As this book shows, federalism has played a vital but often underappreciated role in shaping the modern American state.

"Kimberly S. Johnson offers a welcome reminder to historians of the modern United States: New Deal policy making was not a seamless transition to more centralized policy making in Washington. Rather, it was based on a federalist heritage of power sharing among the states and the national government that stretched back to the nineteenth century. In an era when many Americans view government as the problem, this book reminds us that the current state of affairs emerged from a complex, nuanced mixture of constitutional forces, interest group pressures, and congressional developments."—William R. Childs, Journal of American History

"Not only is Johnson's thesis and argument intriguing and fresh in its approach, so too are her methods of analysis. . . . Johnson has provided a valuable analysis and corrective to the American political development accounts of national-state intergovernmental relations. She has also added a convincing case for the role of Congress in structuring the first New Federalism."—Cindy Simon Rosenthal, APSA Booknotes

"In Governing the American State, Kimberley Johnson challenges the received view that the modern system of intergovernmental relations emerged only after the earlier, more fragmented system of Dual Federalism collapsed, because it was unable to handle the crisis of the Great Depression. She establishes that changes in the U.S. federal system emerged not simply from major exogenous shocks to the political system, but also from considerations and processes that are endogenous to 'politics-as-usual' in the United States."—Martin Shefter, Cornell University, author of Political Parties and the State