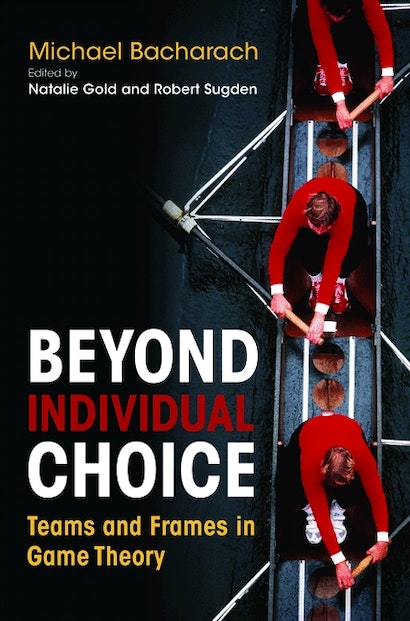 Game theory is central to modern understandings of how people deal with problems of coordination and cooperation. Yet, ironically, it cannot give a straightforward explanation of some of the simplest forms of human coordination and cooperation — most famously, that people can use the apparently arbitrary features of “focal points” to solve coordination problems, and that people sometimes cooperate in “prisoner’s dilemmas.” Addressing a wide readership of economists, sociologists, psychologists, and philosophers, Michael Bacharach here proposes a revision of game theory that resolves these long-standing problems.


In the classical tradition of game theory, Bacharach models human beings as rational actors, but he revises the standard definition of rationality to incorporate two major new ideas. He enlarges the model of a game so that it includes the ways agents describe to themselves (or “frame”) their decision problems. And he allows the possibility that people reason as members of groups (or “teams”), each taking herself to have reason to perform her component of the combination of actions that best achieves the group’s common goal. Bacharach shows that certain tendencies for individuals to engage in team reasoning are consistent with recent findings in social psychology and evolutionary biology.


As the culmination of Bacharach’s long-standing program of pathbreaking work on the foundations of game theory, this book has been eagerly awaited. Following Bacharach’s premature death, Natalie Gold and Robert Sugden edited the unfinished work and added two substantial chapters that allow the book to be read as a coherent whole.

"The editors are to be applauded for bringing this thought-provoking book to the light of day. Anyone who takes game theory as seriously as Michael Bacharach did will benefit from reading this book. Michael Bacharach makes us all swim at the deep end of the pool, and that's where we learn the most."—Roy Gardner, Public Choice

"[This book] provides a helpful overview of an interesting and creative research program that is still being advance by Gold and Sugden along with other collaborators. The book may be welcomed by sociologists searching for alternative conceptions of agency within the rational choice paradigm."—James D. Montgomery, American Journal of Sociology

"I warmly recommend the book to readers interested in problems of collective action and, especially, in precise game-theoretical treatment."—Raimo Tuomela, Economics and Philosophy

"In this highly original book Michael Bacharach aims right at the foundations of game theory by challenging its narrow and individualistic rationality assumptions. While retaining all of the theory's analytical force, he shows how we can incorporate into it broader psychological mechanisms such as frames, social identities, and salience, producing a tool capable of biting deeper and wider into real-world social phenomena. For years to come this book will sharpen the thinking of economists. All social scientists who strive to make sense of social behavior, even those hitherto suspicious of game theory, will find it a treasure trove of inspiration."—Diego Gambetta, Professor of Sociology and Official Fellow, Nuffield College, University of Oxford

"Michael Bacharach is best known as the creator of the epistemological approach to game theory. He died while working on an equally creative project that aimed at understanding the psychology of human coordination processes. Gold and Sugden are to be congratulated on working up the notes he left behind into a book that captures the kind of intellectual adventure that Bacharach loved so much."—Ken Binmore, Emeritus Professor of Economics, University College London, author of Game Theory and the Social Contract, Vol. I and Vol. II

"Beyond Individual Choice addresses an important topic in game theory, namely, the type of reasoning that leads to coordination and cooperation in common interest games. It offers sensible and creative solutions to problems of strategic reasoning and thereby makes an excellent contribution to the foundations of game theory. The editors have done a fine job with Michael Bacharach's work; their perspectives complement his and add both unity and depth to the volume. Economists, psychologists, and philosophers will welcome the book, which is accessible to students of game theory in each of those disciplines."—Paul Weirich, Professor of Philosophy, University of Missouri, author of Realistic Decision Theory