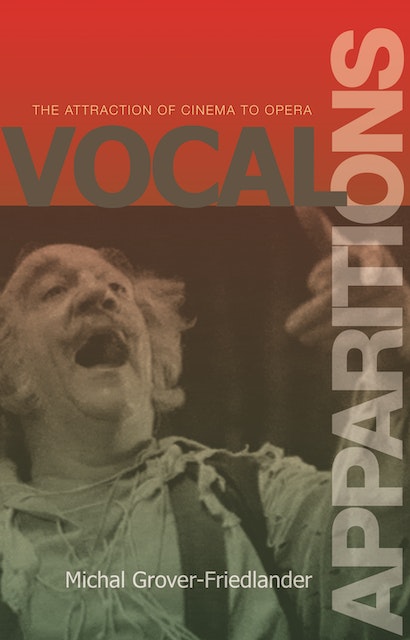 Cinema and opera have become intertwined in a variety of powerful and unusual ways. Vocal Apparitions tells the story of this fascinating intersection, interprets how it occurred, and explores what happens when opera is projected onto the medium of film. Michal Grover-Friedlander finds striking affinities between film and opera — from Lon Chaney’s classic silent film, The Phantom of the Opera, to the Marx Brothers’ A Night at the Opera to Fellini’s E la nave va.


One of the guiding questions of this book is what occurs when what is aesthetically essential about one medium is transposed into the aesthetic field of the other. For example, Grover-Friedlander’s comparison of an opera by Poulenc and a Rossellini film, both based on Cocteau’s play The Human Voice, shows the relation of the vocal and the visual to be surprisingly affected by the choice of the medium. Her analysis of the Marx Brothers’ A Night at the Opera demonstrates how, as a response to opera’s infatuation with death, cinema comically acts out a correction of opera’s fate. Grover-Friedlander argues that filmed operas such as Zeffirelli’s Otello and Friedrich’s Falstaff show the impossibility of a direct transformation of the operatic into the cinematic.


Paradoxically, cinema at times can be more operatic than opera itself, thus capturing something essential that escapes opera’s self-understanding. A remarkable look at how cinema has been haunted — and transformed — by opera, Vocal Apparitions reveals something original and important about each medium.

Michal Grover-Friedlander teaches in the Musicology Department and the Interdisciplinary Program in the Arts at Tel Aviv University.

"An enormously engaging book. Grover-Friedlander's reflections on individual operas and films, and on the structural relationship between the two genres, are several steps ahead of any existing book on the subject."—-Mary Ann Smart, University of California, Berkeley

"The sublime topic of opera in (and as) film has increasingly attracted the attention of young, culturally aware, scholars. The book presents an ideal orientation to the reach of the phenomenon. The depth of Michal Grover-Friedlander's knowledge, her intellectual verve and purpose are everywhere in evidence."—Stanley Cavell, Harvard University

"No précis is adequate to the range and perceptiveness of Vocal Apparitions, which sets Harpo Marx's mute "singing" aside silent speech as remnants from silent opera tradition, or lip-synching as a technological corruption of the operatic voice aside the telephone in Poulenc's La Voix Humaine and its orchestral voice-effects. The sheer intellectual élan of Grover-Friedlander's book lends it a marvelous wind-from-another-planet quality that is to be celebrated in no uncertain terms."—Carolyn Abbate, Princeton University