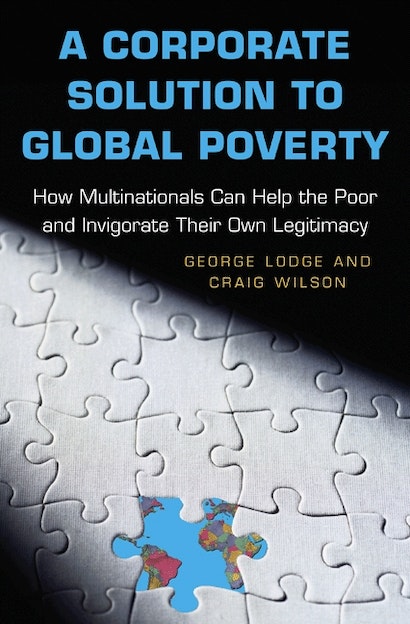 World leaders have given the reduction of global poverty top priority. And yet it persists. Indeed, in many countries whose governments lack either the desire or the ability to act, poverty has worsened. This book, a joint venture of a Harvard professor and an economist with the International Finance Corporation, argues that the solution lies in the creation of a new institution, the World Development Corporation (WDC), a partnership of multinational corporations (MNCs), international development agencies, and nongovernmental organizations (NGOs).


In A Corporate Solution to Global Poverty, George Lodge and Craig Wilson assert that MNCs have the critical combination of capabilities required to build investment, grow economies, and create jobs in poor countries, and thus to reduce poverty. Furthermore, they can do so profitably and thus sustainably. But they lack legitimacy and risk can be high, and so a collective approach is better than one in which an individual company proceeds alone. Thus a UN-sponsored WDC, owned and managed by a dozen or so MNCs with NGO support, will make a marked difference.


At a time when big business has been demonized for destroying the environment, enjoying one-sided benefits from globalization, and deceiving investors, the book argues, MNCs have much to gain from becoming more effective in reducing global poverty. This is not a call for philanthropy. Lodge and Wilson believe that corporate support for the World Development Corporation will benefit not only the world’s poor but also company shareholders as a result of improved MNC legitimacy and stronger markets and profitability.

George Lodge is Jaime and Josefina Chua Tiampo Professor of Business Administration Emeritus at Harvard Business School. In 1958, President Dwight D. Eisenhower named him Assistant Secretary of Labor for International Affairs, a position to which President John F. Kennedy reappointed him several years later. His books include Managing Globalization in the Age of Interdependence, The New American Ideology, and The American Disease. After spending nine years in the Australian foreign service, Craig Wilson worked for five years as a consultant economist with the World Bank and other NGOs. In 2005 he joined the International Finance Corporation and is currently based in Bangladesh, where he is managing a program aimed at improving the investment environment in South Asia.

"A Corporate Solution to Global Poverty provides a valuable—and exceedingly readable—primer on corporate social responsibility as well as a compelling approach to the use of corporate wealth to benefit the world's poorest."—Joshua Rosenthal, International Law and Politics

"A Corporate Solution to Global Poverty is a fresh and original approach to the economics and ethics of globalization. Invoking the crisis in corporate legitimacy, the authors of this stimulating book argue persuasively that the reduction of world poverty would restore legitimacy to multinational corporate life. Along the way, readers will absorb much interesting nformation about the global state of play and the presentation of a prospective solution."—Arthur Schlesinger, Jr., Pulitzer Prize-winning historian

"In an attempt to reduce global poverty, some focus on rock concerts, others on macroeconomic theory, others build ever larger bureaucracies. Lodge and Wilson do not hesitate to dissect, deconstruct, and devour ideologies, policies, and institutions that have promised a lot and delivered very little. They provide an alternative answer, one that is clear, hard-headed, obvious, and mostly ignored; business is and will remain the driving part of the equation. If you are interested in results, this is an entertaining and smart book. If you are a theoretician you are likely to become increasingly unhappy as you confront a great deal of common sense delivered with passion and humor."—Juan Enriguez, President of Synthetic Genomics and author of As The Future Catches You

"George Lodge and Craig Wilson offer a fascinating review of the fast changing role of big business and its relations with the international community and civil society. The authors comprehensively outline the increasingly complex relationships that multinationals must manage in the face of increased demands to do more than just make profit."—Frannie Léautier, Vice President, World Bank Institute

"A very well written book on an important subject. It will reach a broad audience."—Stephen Kobrin, University of Pennsylvania