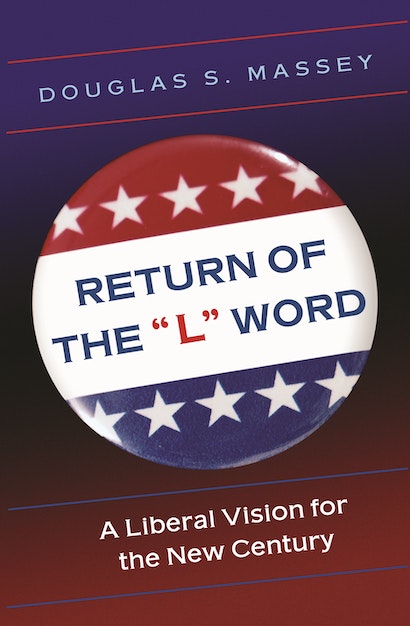 Somewhere in the 1970s liberals in the United States lost their way. After successes like the New Deal, they became arrogant. So argues Douglas Massey in Return of the “L” Word. Faced with the difficult politics of race and class, liberals used the heavy hand of government to impose policies on a resentful public. Conservatives capitalized on this with a staunch ideology of free markets, limited government, and conservative social values. The time is ripe for a liberal realignment, declares Massey, but what has been lacking is a consistent liberal ideology that explains to voters, in simple terms, government’s vital role in producing a healthier, more financially equitable, less divided society.


This book supplies that ideology. Massey begins his powerful manifesto by laying out the liberals’ mistakes over the past twenty years. Drawing on insights from the expanding field of economic sociology, he then sets forth a clear set of liberal principles to explain how markets work in society, principles he applies to articulate salable liberal policies.


After outlining a new liberal political philosophy, Massey traces liberalism’s opposition and says plainly: liberals should have no illusions about the competition’s resolve and skill. He closes with a practical approach to liberal coalition-building in America. The political economy conservatives have constructed in recent decades has benefited 20 percent of the people. Liberal success requires a return to material rather than symbolic politics, showing most Americans why it is in their economic as well as moral interest to support the liberal cause.

Douglas S. Massey is Professor of Sociology and Public Affairs at Princeton University. He is the author of The Source of the River (Princeton) and American Apartheid. He is Past President of the American Sociological Association.

"A brisk and crisply written manifesto, this book is a liberal call to arms—or at least to arguments."—Michael P. Lynch, The Chronicle of Higher Education

"[Massey] considers why liberalism has declined and offers a novel repackaging of its values in the hopes of rekindling a coherent liberal response to the dominant conservative ideology."—Library Journal

"A thoughtful and intelligent assessment of why American liberalism declined in the last third of the twentieth century, and what can be done to resurrect it in the first third of the twenty-first."—Robert B. Reich, former U.S. Secretary of Labor, Hexter Professor of Social and Economic Policy, Brandeis University

"I took Douglas Massey's Return of the "L" Word along with me on a flight to the West Coast, not really thinking I'd get to reading it. Once I started, I couldn't stop. It's terrific. Massey has given us a forceful, passionate reminder of what liberalism has accomplished and why it is worth rebuilding and defending with all the energy we can muster. All those who woke up distraught on November 3, 2004, should read this book, roll up their sleeves, and get to work."—Barry Schwartz, author of The Paradox of Choice

"One Douglas Massey is worth ten Michael Moores, if you ask me! Here is the public intellectual at his best, writing with passion and thinking in concrete, practical terms about the future of political debate in this country."—Glenn C. Loury, Boston University, author of The Anatomy of Racial Inequality and One by One from the Inside Out

"Douglas Massey's new book is a bold attempt to demonstrate that liberalism is still viable politics. Massey argues for a liberalism based on the recognition that markets—domestic and global—are not autonomous mechanisms, but are subject to either democratic control or narrow private manipulation. If that insight can be translated into a popular politics, and a program for equitably and efficiently distributing the fruits of the new global information economy, then liberalism might indeed have something to offer."—John B. Judis, Visiting Scholar, Carnegie Endowment; Senior Editor, New Republic

"In this crisp, tightly argued book, Douglas Massey forcefully reminds liberals of the principles they once stood for. He makes a persuasive case that liberalism must return to these principles to be effective in the new century and beat back the challenge of the radical right."—Ruy Teixeira, coauthor of The Emerging Democratic Majority

"Douglas Massey boldly reclaims the 'L word' and returns the political conversation to the promise of progressive government. He urges liberals to own up to their failures in connecting to the aspirations of ordinary Americans and lays out a clear and compelling agenda for activist government. We have long needed a clear voice that speaks unambiguously and proudly for the liberal cause. We have found it in Massey. This book is essential reading for anyone who cares about the future of American politics."—Katherine Newman, Professor of Sociology and Public Affairs, Princeton University

"A fine piece of work. I particularly welcome Massey's tracing of liberal history back to the beginnings of America and his criticism of liberals themselves for elitism, which is true and is welcome."—Jeff Madrick, author of Why Economies Grow and The End of Affluence

"In this persuasive and brilliantly argued book, Douglas Massey outlines with great clarity the issues American liberalism must address in order to emerge from its current malaise with a progressive program that has broad appeal to voters."—Victor Nee, Cornell University, coauthor of Remaking the American Mainstream