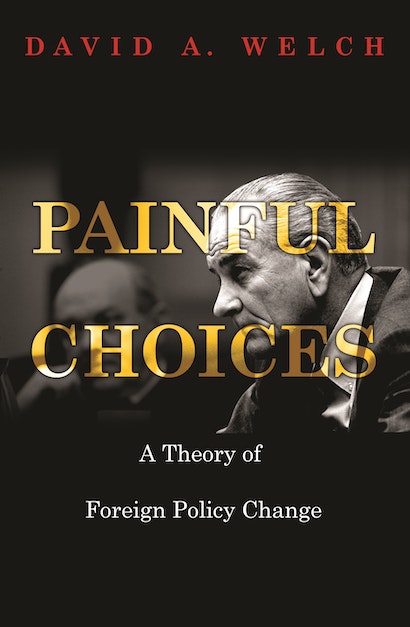 Under what conditions should we expect states to do things radically differently all of a sudden? In this book, David Welch seeks to answer this question, constructing a theory of foreign policy change inspired by organization theory, cognitive and motivational psychology, and prospect theory. He then “test drives” the theory in a series of comparative case studies in the security and trade domains: Argentina’s decision to go to war over the Falklands/Malvinas vs. Japan’s endless patience with diplomacy in its conflict with Russia over the Northern Territories; America’s decision to commit large-scale military force to Vietnam vs. its ultimate decision to withdraw; and Canada’s two abortive flirtations with free trade with the United States in 1911 and 1948 vs. its embrace of free trade in the late 1980s.

Painful Choices has three main objectives: to determine whether the general theory project in the field of international relations can be redeemed, given disappointment with previous attempts; to reflect on what this reveals about the possibilities and limits of general theory; and to inform policy. Welch argues that earlier efforts at general theory erred by aiming to explain state behavior, which is an intractable problem. Instead, since inertia is the default expectation in international politics, all we need do is to explain changes in behavior. Painful Choices shows that this is a tractable problem with clear implications for intelligence analysts and negotiators.

David A. Welch holds the George Ignatieff Chair of Peace and Conflict Studies at the University of Toronto. He is the author of Justice and the Genesis of War, winner of the 1994 Edgar S. Furniss Award for an Outstanding Contribution to National Security Studies.

"David Welch is to be commended for developing an ambitious theory that recognizes that humans, not factors, make decisions, and that they are affected by history and psychology."—Max Paul Friedman, Political Science Quarterly

"Well written and accessible to non-specialists. . . . Welch's skillful use of historical materials should please historians in particular. . . . Welch has made a substantial contribution to international relations theory with this book."—Barbara Farnham, International History Review

"This ambitious and clear-headed book advances the cause of eclectic theorizing. A compelling theory of foreign policy change is supported by highly readable plausibility probes. David Welch's impeccable scholarship has succeeded where most of ours has failed us—joining analytical parsimony with policy relevance."—Peter J. Katzenstein, Walter S. Carpenter, Jr. Professor of International Studies, Cornell University

"David Welch has written an outstanding account of foreign policy change. His main claim is that leaders will change foreign policy most when they perceive existing policy as likely to lead to painful losses; they are not motivated to change policy simply because they might be able to make minor gains. He develops three main hypotheses to operationalise this claim, and 'test drives' these against a set of structured, focused case studies. He finds that his theory is substantially confirmed by the case studies, and he sees this as vindication of general theory. This is a fascinating book, with an excellent integration between theory and practice; it will become required reading for anyone interested in explaining foreign policy change or in international theory. Illuminating and theoretically convincing, this is that rare thing-a theoretically sophisticated book that says something new, and does so by the use of detailed case studies."—Steve Smith, Vice-Chancellor and Professor of International Relations, University of Exeter

"Exceptionally well written, and mercifully free of jargon, this book is a major contribution to the field. By placing policy change at the core of the theory of foreign policy he seeks to develop, Welch deviates sharply from recent scholarship—and this is precisely the strength of his book. Not only will political scientists welcome the book but so too will historians, both because of the excellent case studies and because Welch is adept at using historical materials without distorting them to 'prove' some abstract theory."—Ole R. Holsti, George V. Allen Professor of Political Science, Duke University

"This very well written book addresses an area of international relations and foreign policy research that has received little attention in the field. The scholarship, both in the theoretical and empirical sections, is excellent; the research behind its case studies is first rate. Welch's writing is lively, and he effectively articulates complex ideas in easily digestible ways. No other work brings together institutional, psychological, and loss/gains-frame analysis like this book."—Scott Silverstone, Associate Professor of Political Science, United States Military Academy, West Point