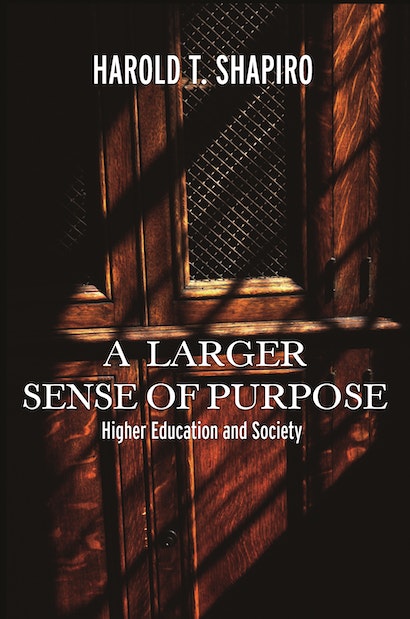 Universities were once largely insular institutions whose purview extended no further than the campus gates. Not anymore. Today’s universities have evolved into multifaceted organizations with complex connections to government, business, and the community. This thought-provoking book by Harold Shapiro, former president of both Princeton University and the University of Michigan, and Chairman of the National Bioethics Advisory Commission under President Bill Clinton, explores the role the modern university should play as an ethical force and societal steward.


Based on the 2003 Clark Kerr lectures, A Larger Sense of Purpose draws from Shapiro’s twenty-five years of experience leading major research universities and takes up key topics of debate in higher education. What are the nature and objectives of a liberal education? How should universities address the increasing commercialization not only of intercollegiate sports but of education and research? What are the university’s responsibilities for the moral education of students?


The book begins with an expanded history of the modern research institution followed by essays on ethics, the academic curriculum, the differences between private and public higher education, the future of intellectual property rights, and the changing relationship between the nation’s universities and the for-profit sector. Shapiro calls for universities to be more accountable morally as well as academically. He urges scientists not only to educate others about the potential and limitations of science but also to acknowledge the public’s distress over the challenges presented by the very success of the scientific enterprise. He advocates for a more intimate connection between professional training and the liberal arts — in the hope that future doctors, lawyers, and business executives will be educated in ethics and the social sciences as well as they are in anatomy, torts, and leveraged buyouts.


Candid, timely, and provocative, A Larger Sense of Purpose demands the attention of not only those in academics but of anyone who shares an interest in the soul of education.

Harold T. Shapiro served as President of the University of Michigan (1979-1988) and as President of Princeton University (1988-2001). He is currently Professor of Economics and Public Affairs at Princeton. The coeditor of Universities and Their Leadership (Princeton), he served as chair of the National Bioethics Advisory Commission from July 1996 to October 2001, and from 1990 to 1992 as a member and vice chair of President George Bush's Council of Advisors on Science and Technology.

"Shapiro clearly and persuasively enunciates his major theme—that universities have a responsibility for performing two important social functions. One is to serve existing society, and the other is to challenge it."—Charles T. Clotfelter, Duke University

"This book reflects an effort by one of our most distinguished educational leaders to look beneath the surface of existing controversies and ask deeper questions about the role of the university in a modern liberal democracy. Shapiro's analysis is well tuned to the paradoxical character of the modern university as at once loyal servant and stubborn critic of the society that sustains it."—Michael McPherson, President, the Spencer Foundation, and former President of Macalaster College