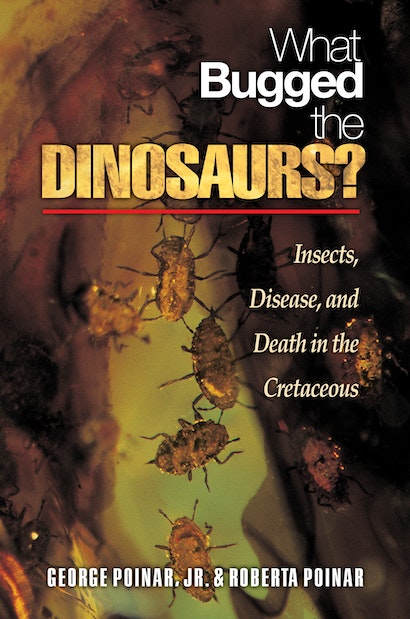 Millions of years ago in the Cretaceous period, the mighty Tyrannosaurus rex — with its dagger-like teeth for tearing its prey to ribbons — was undoubtedly the fiercest carnivore to roam the Earth. Yet as What Bugged the Dinosaurs? reveals, T. rex was not the only killer. George and Roberta Poinar show how insects — from biting sand flies to disease-causing parasites — dominated life on the planet and played a significant role in the life and death of the dinosaurs.


The Poinars bring the age of the dinosaurs marvelously to life. Analyzing exotic insects fossilized in Cretaceous amber at three major deposits in Lebanon, Burma, and Canada, they reconstruct the complex ecology of a hostile prehistoric world inhabited by voracious swarms of insects. The Poinars draw upon tantalizing new evidence from their amazing discoveries of disease-producing vertebrate pathogens in Cretaceous blood-sucking flies, as well as intestinal worms and protozoa found in fossilized dinosaur excrement, to provide a unique view of how insects infected with malaria, leishmania, and other pathogens, together with intestinal parasites, could have devastated dinosaur populations.


A scientific adventure story from the authors whose research inspired Jurassic Park, What Bugged the Dinosaurs?? offers compelling evidence of how insects directly and indirectly contributed to the dinosaurs’ demise.

George Poinar, Jr., is currently in the Zoology Department at Oregon State University. He is well known internationally in various fields, including paleobiology, nematology, and insect pathology. He became familiar with tropical diseases while serving as a consultant for the United Nations and World Health Organization. Roberta Poinar is a retired research scientist. They are the coauthors of The Amber Forest: A Reconstruction of a Vanished World (Princeton) and The Quest for Life in Amber. Their research has been featured in leading publications worldwide and on television programs such as Nova.

"[An] ambitious foray. . . . The excellent colour pictures of fossil insects in Cretaceous amber are spectacular and evocative. This book shows that bloodsucking insects were well-established in the age of dinosaurs . . . it is in the area of parasites and pathogens that this book startles. This book . . . opens doors and invites questions . . . and the accounts of the scientific endeavours cannot fail to impress."—Gaden Robinson, Times Literary Supplement

"[A] detailed study of insects' role in the life and extinction of Cretaceous plants and animals. In scientific but straightforward language, the Poinars advance convincingly the thesis that insects acted as vectors for pathogens, spreading bacteria, fungi and viruses to plants as well as dinosaurs, who then passed it on to others. Using current examples like Dutch elm disease, speculative scenarios of Cretaceous life and plenty of research data, the authors add an intriguing new dimension to the dinosaur apocalypse narrative: periods of temperature change, marine regression, volcanic eruptions, and one or more meteor impacts. . . . A perfect setting for the spread of diseases."—Publishers Weekly

"Dinosaurs are usually portrayed as the pristine masters of the Cretaceous. George and Roberta Poinar's new book presents a different view—dinosaurs besieged by swarms of insects; dinosaurs with oozing, infected bites; dinosaurs weakened by parasite-induced illnesses. What Bugged the Dinosaurs? draws on the Poinars' many studies of fossils in amber to show how dinosaurs interacted with their more abundant invertebrate contemporaries. Reconstructing ancient ecosystems is an ambitious undertaking. Integrative approaches such as those in What Bugged the Dinosaurs? help us build up more sophisticated visions of the past."—Karen Chin, Nature

"Whether or not you accept the authors' conclusion, they make a strong case that the true rulers of the Cretaceous were not the big lizards that towered over the landscape, but the tiny buggers that pervaded it."—Laurence A. Marschall, Natural History

"What Bugged the Dinosaurs tells the story of insects' tremendous impact on Cretaceous ecosystems...There are fascinating chapters on the evolution of pathogens, what makes insects 'the ultimate survivors,' and the nature of extinctions...The scientific and, at times, technical, subject of this book is complemented by an often colorful narrative style...worthwhile for lay readers as well as experts."—Aaron Brooks, ForeWord Magazine

"The Poinars graphically detail the probably diseases, debilitations, and deaths of dinosaurs from the life-cycle perspective of insects that infested them. The Poinars directly encourage younger readers by emphasizing how wide open paleoentomology is to future researchers. They impart enthusiasm in recounting their own discoveries...a mood supported by this book's several dozen photographs and drawings. Showing dinosaurs beleaguered, the Poinars temper the popular image of their dominance."—Gilbert Taylor, Booklist

"Thanks to the astonishingly detailed evidence provided by insects trapped in amber, we know that insects competed with dinosaurs for food preyed on them, scavenged their corpses and cleared away their droppings. Most importantly perhaps, they infected them with thousands of different diseases and parasites. The authors...even go so far as to argue that these diseases may have been the killing blow that finally pushed the dinosaurs into extinction. [What Bugged the Dinosaurs?] does an excellent job of bringing to life the mini-beasts of the Mesozoic."—Luis Villazon, BBC Focus Magazine

"The book deftly guides readers through the science essential to understanding...that it is impossible to describe life in the Cretaceous Period without paying particular attention to insects. Chapter by chapter, the authors introduce a wide range of insect species that bite, swarm, irritate, and even take up residence within and on the dinosaurs. They draw their stories from the fossil record, especially the amber of their expertise, comparing Cretaceous insects with their present-day descendents. Readers follow the authors into the laboratory where they analyze delicate evidence in the form of magnificent color images. Readers who love paleontology will feel the same way about this remarkable book, savoring its fascinating trove of questions and knowledge."—Fred Bortz, Philadelphia Inquirer

"The Poinars bring the age of the dinosaurs incredibly to life. Analyzing exotic insects fossilized in Cretaceous amber . . . they reconstruct the complex ecology of a hostile prehistoric world inhabited by voracious swarms of insects. The Poinars draw upon tantalizing new evidence . . . to provide a unique view of how insects infected with malaria, leishmania, and other pathogens . . . could have devastated dinosaur populations. This is a scientific adventure story from the authors whose research inspired Jurassic Park. . . . A fine book full of information found nowhere else."—Prehistoric Times

"The reader...will come away from this volume fully accepting of its premise. We will certainly add this thesis to our own compendium because of the evidence presented by the Poinars. What Bugged the Dinosaurs? is positioned to be a definitive treatise that should be a part of any serious paleontologist's library."—Greg Sweatt, Fossil News

"There are many theories about what factors ultimately caused the mass extinction of non-avian dinosaurs at the close of the Cretaceous period 65.5 million years ago. . . . Using amber-preserved fossils from the Cretaceous period, George Poinar and Roberta Poinar focus on insects and other invertebrates. The brief, well-written chapters each discuss certain arthopods (or parasitic worms). . . . Some accounts are not for the squeamish, but they all fascinate. . . . Valuable for all ecology students."—J. C. Kricher, Wheaton College, for, CHOICE

"This is an assiduously written book for entomologists and parasitologists who would like to learn more on the time-encapsulated data from the Cretaceous, and perhaps stimulate the search for more 'paleoparasites.'"—Raymond L. Jacobson, Parasites and Vectors

"This is an enlightening read."—Wildlife Activist

"This volume is not simply a dry exposition of an interesting theory. Good descriptive writing makes the ancient landscape the authors explore come alive. The book is highly recommended for undergraduate and graduate collections and public libraries."—Bruce E. Fleury, Science Books & Film

"I would certainly recommend this book to anyone interested in dinosaurs and prehistoric life in general. It has changed the way I imagine the Cretaceous and the extinction of the dinosaurs and I am sure it will open up new avenues of thought in this area."—Lucy Goodchild, Microbiology Today

"This is an excellent book. There is no doubt Poinar and Poinar have admirable track records and they are well known for their sustained and high-quality work on fossil insects, and especially on insects in amber."—Michael J. Benton, author of When Life Nearly Died: The Greatest Mass Extinction of All Time

"Interesting and engaging. This book presents evidence that insects interacted as prey, as competitors for plant food, and as vectors of dinosaur diseases. It develops the intriguing and plausible hypothesis that insects contributed to the extinction of dinosaurs."—Timothy D. Schowalter, author of Insect Ecology: An Ecosystem Approach