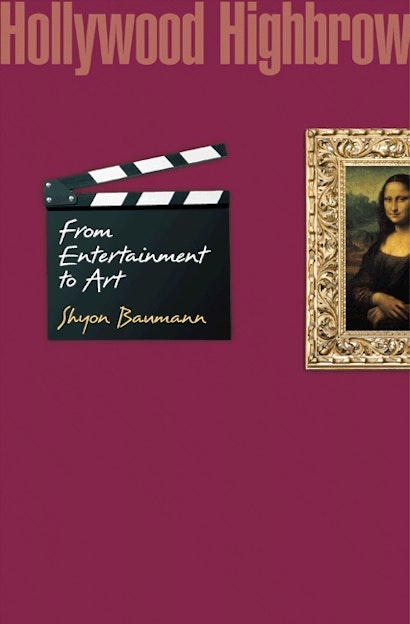 Today’s moviegoers and critics generally consider some Hollywood products — even some blockbusters — to be legitimate works of art. But during the first half century of motion pictures very few Americans would have thought to call an American movie “art.” Up through the 1950s, American movies were regarded as a form of popular, even lower-class, entertainment. By the 1960s and 1970s, however, viewers were regularly judging Hollywood films by artistic criteria previously applied only to high art forms. In Hollywood Highbrow, Shyon Baumann for the first time tells how social and cultural forces radically changed the public’s perceptions of American movies just as those forces were radically changing the movies themselves.


The development in the United States of an appreciation of film as an art was, Baumann shows, the product of large changes in Hollywood and American society as a whole. With the postwar rise of television, American movie audiences shrank dramatically and Hollywood responded by appealing to richer and more educated viewers. Around the same time, European ideas about the director as artist, an easing of censorship, and the development of art-house cinemas, film festivals, and the academic field of film studies encouraged the idea that some American movies — and not just European ones — deserved to be considered art.

Shyon Baumann is assistant professor of sociology at the University of Toronto.

"Hollywood Highbrow: From Entertainment to Art is an important contribution to many disciplines: sociology of art and cinema, political economy of culture, American studies, cultural studies, even marketing, and, of course, film studies."—Yves LaBerge, Canadian Journal of Sociology

"What is perhaps most remarkable about Hollywood Highbrow is how it successfully synthesizes various causal explanations for how and why objects become culturally valorized. Here, Baumann presents an in-depth examination of how cultural hierarchies change, conceptualizing cultural hierarchies as mulitcausal 'processes'."—International Review of Modern Sociology

"In sum, I strongly encourage scholars of cultural phenomena to read this fine text. It is a clear and through presentation of an extremely complicated process, and so it should satisfy the interest of both experts and their students and colleagues. The book establishes a high place for Baumann among the new generation of scholars of culture, and I highly recommend it."—Jennifer C. Lena, American Journal of Sociology

"Hollywood Highbrow is a fine account of the process by which Americans came to view film as an art form. The book will be of great interest both to historians of film and to sociologists interested in how certain cultural products become respected and prestigious. Shyon Baumann is the first to address these issues broadly for the case of American film. He writes engagingly and the book is a good read."—Paul J. DiMaggio, Princeton University