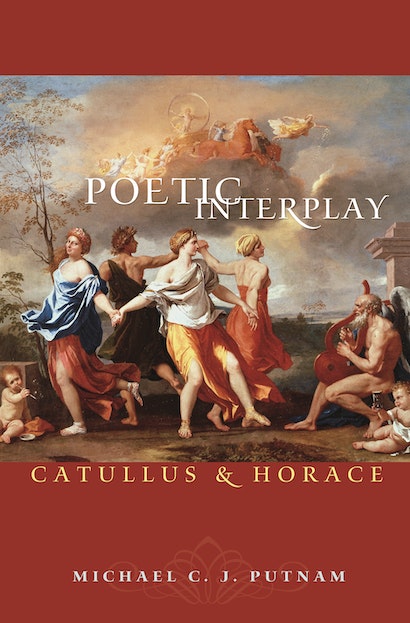 The lives of Catullus and Horace overlap by a dozen years in the first century BC. Yet, though they are the undisputed masters of the lyric voice in Roman poetry, Horace directly mentions his great predecessor, Catullus, only once, and this reference has often been taken as mocking. In fact, Horace’s allusion, far from disparaging Catullus, pays him a discreet compliment by suggesting the challenge that his accomplishment presented to his successors, including Horace himself. In Poetic Interplay, the first book-length study of Catullus’s influence on Horace, Michael Putnam shows that the earlier poet was probably the single most important source of inspiration for Horace’s Odes, the later author’s magnum opus.


Except in some half-dozen poems, Catullus is not, technically, writing lyric because his favored meters do not fall into that category. Nonetheless, however disparate their preferred genres and their stylistic usage, Horace found in the poetry of Catullus, whatever its mode of presentation, a constant stimulus for his imagination. And, despite the differences between the two poets, Putnam’s close readings reveal that many of Horace’s poems echo Catullus verbally, thematically, or both. By illustrating how Horace often found his own voice even as he acknowledged Catullus’s genius, Putnam guides us to a deeper appreciation of the earlier poet as well.

Michael C. J. Putnam is MacMillan Professor of Classics and Professor of Comparative Literature at Brown University. He is the author of ten books, including The Poetry of the Aeneid, and coeditor of The Virgilian Tradition (forthcoming).

"This study makes an important contribution to classical scholarship in its reassessment of Horace's engagement with Catullan lyric by reminding the reader of the extent of Horace's formal and thematic debts to Catullus and the range of strategies he employs for diffusing the visibility of the earlier poet's influence."—Choice

"Scholars in particular may profit a lot from such a detailed treatment of the subject, but for anyone who is intrigued by the allusions to Catullus that continually surface in Horace, this is the book to consult."—Bruce Arnold, The Classical Outlook

"This new book is thought provoking and persuasive in its argument for 'the ubiquity of Catullus as a presence' in the Horatian lyric corpus. It is also a work that should be of considerable interest not only for students of Horace but also for those who study the relationship between Augustan literature and the literature of the late Republic."—Grigory Starikovsky, Classical World

"P.'s groundbreaking work on Catullus and Horace in the 1960s and 70s finds its complement in his new book, which puts flesh on an old connection that has never been systematically explored. This expanded version of the Charles Beebe Martin Classical Lectures, delivered at Oberlin College in March 2004, provides a fascinating close-up on the way one poet inhabits another."—William Fitzgerald, Journal of Roman Studies

"This is a book that has long been needed and I can't think of anyone better to have written it than Michael Putnam. For any scholar working on either Horace or Catullus, this book will be essential reading. Putnam's argument about the extent of their 'poetic interplay' is not only convincing, but also quite astonishing."—Ronnie Ancona, Hunter College and Graduate Center of the City University of New York

"Exceptionally fluent. There is no other book-length study on this subject. Putnam makes a convincing case for the central role Catullus plays in Horace's lyric poetry."—Ortwin Knorr, Willamette University