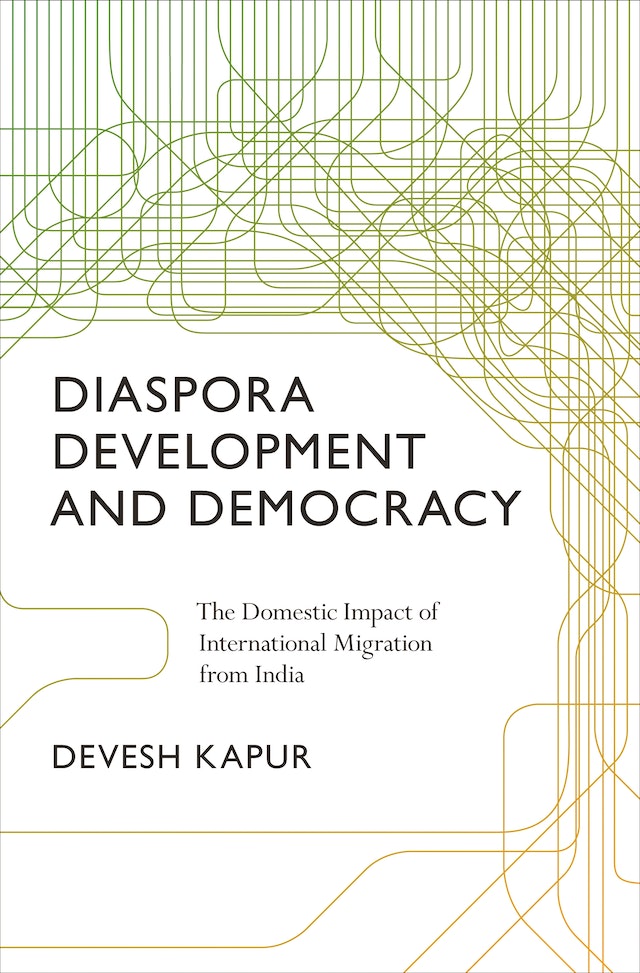 What happens to a country when its skilled workers emigrate? The first book to examine the complex economic, social, and political effects of emigration on India, Diaspora, Development, and Democracy provides a conceptual framework for understanding the repercussions of international migration on migrants’ home countries.


Devesh Kapur finds that migration has influenced India far beyond a simplistic “brain drain” — migration’s impact greatly depends on who leaves and why. The book offers new methods and empirical evidence for measuring these traits and shows how data about these characteristics link to specific outcomes. For instance, the positive selection of Indian migrants through education has strengthened India’s democracy by creating a political space for previously excluded social groups. Because older Indian elites have an exit option, they are less likely to resist the loss of political power at home. Education and training abroad has played an important role in facilitating the flow of expertise to India, integrating the country into the world economy, positively shaping how India is perceived, and changing traditional conceptions of citizenship. The book highlights a paradox — while international migration is a cause and consequence of globalization, its effects on countries of origin depend largely on factors internal to those countries.


A rich portrait of the Indian migrant community, Diaspora, Development, and Democracy explores the complex political and economic consequences of migration for the countries migrants leave behind.

Devesh Kapur is associate professor of political science and holds the Madan Lal Sobti Professorship for the Study of Contemporary India at the University of Pennsylvania.

"Kapur's innovative study examines the impact of international migration from India on Indian democracy and development. His analytical framework allows him to investigate how household decision making is affected among those considering emigration, how those left behind are affected, how the diaspora affects India from abroad, and how returning Indians make a difference."—Choice

"Kapur's [book] provide[s] a useful academic and analytical foil to easy generalizations about the influence of the Indian diaspora at home and abroad."—William Crawley, Asian Affairs

"[T]he value of this book is extraordinary because of the author's insightful and systematic analysis of the various aspects of the Indian diaspora."—Norio Kondo, Developing Economies

"Kapur makes a powerful case that international flows of people are shaping the world in ways with which we have yet to come to grips. Kapur artfully combines case studies, statistical analysis, and new surveys, from both India and the United States, to paint a fascinating picture of India's experience that is full of twists and surprises. He documents how the Indian diaspora has been a source, not just of remittances, but also of ideas, networks, influence, and even democratic stability. Emigration leaves a large footprint on the Indian polity and economy. But whether it produces good or ill effects, Kapur concludes, depends more on domestic structures than on global ones."—Dani Rodrik, Harvard University

"This book has four achievements. It is the best account to date of one of the major phenomenon of our time: the creation of a powerful Indian diaspora and its impact on India. It sets new benchmarks in innovative ways of collecting data and introducing empirical rigor to discussions of the subject. It makes a deeply interesting theoretical argument about how exit options may help mitigate conflict. And finally, it shows how often, development is the product of many unintended actions. It combines a novel historical imagination with good social science."—Pratap Bhanu Mehta, president, Center for Policy Research Delhi

"Truly original, this book opens up an entirely new area of study. By looking at how the movement of people across the world influences the countries of their origin and then carefully tracing these causal connections with reference to India, Kapur is setting an agenda that others will follow."—Atul Kohli, Princeton University

"This is a landmark in migration studies, and in the study of the Indian diaspora and its effects on both host countries and India. The book revolutionizes our understanding of the Indian diaspora, and the political, economic, and social effects of contemporary migrant communities in general."—Steven Wilkinson, Yale University