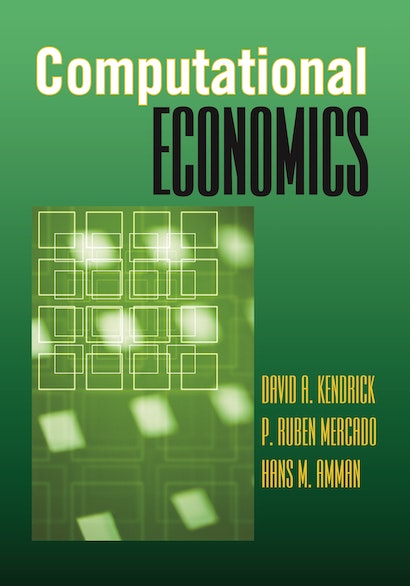 The ability to conceptualize an economic problem verbally, to formulate it as a mathematical model, and then represent the mathematics in software so that the model can be solved on a computer is a crucial skill for economists. Computational Economics contains well-known models — and some brand-new ones — designed to help students move from verbal to mathematical to computational representations in economic modeling. The authors’ focus, however, is not just on solving the models, but also on developing the ability to modify them to reflect one’s interest and point of view. The result is a book that enables students to be creative in developing models that are relevant to the economic problems of their times.


Unlike other computational economics textbooks, this book is organized around economic topics, among them macroeconomics, microeconomics, and finance. The authors employ various software systems — including MATLAB, Mathematica, GAMS, the nonlinear programming solver in Excel, and the database systems in Access — to enable students to use the most advantageous system. The book progresses from relatively simple models to more complex ones, and includes appendices on the ins and outs of running each program.


The book is intended for use by advanced undergraduates and professional economists and even, as a first exposure to computational economics, by graduate students.

"The book succeeds perfectly at enhancing the creativity and productivity of students in economics and related fields by clearly circumventing the traditional approach. The problems presented will attract the students' attention and provide motivation for further work."—Manfred Gilli, University of Geneva, Switzerland

"Computational Economics is a pioneering textbook by the world leaders in the field."—Alan S. Manne, Stanford University