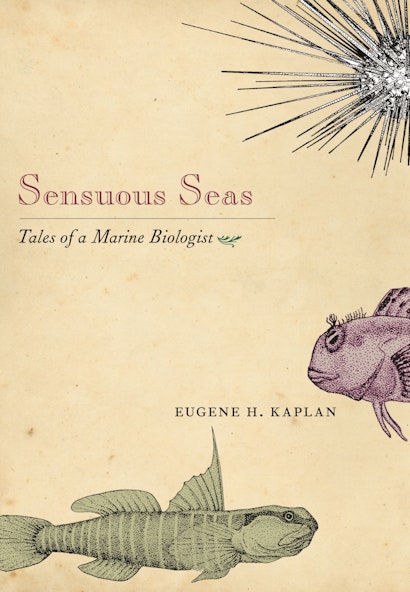 Learning marine biology from a textbook is one thing. But take readers to the bottom of the sea in a submarine to discover living fossils or to coral reefs to observe a day in the life of an octopus, and the sea and its splendors come into focus, in brilliant colors and with immediacy.


In Sensuous Seas, Eugene Kaplan offers readers an irresistibly irreverent voyage to the world of sea creatures, with a look at their habitats, their beauty and, yes, even their sex lives. A marine biologist who has built fish farms in Africa and established a marine laboratory in Jamaica, Kaplan takes us to oceans across the world to experience the lives of their inhabitants, from the horribly grotesque to the exquisitely beautiful. In chapters with titles such as “Fiddler on the Root” (reproductive rituals of fiddler crabs) and “Size Does Count” (why barnacles have the largest penis, comparatively, in the animal kingdom), Kaplan ventures inside coral reefs to study mating parrotfish; dives 740 feet in a submarine to find living fossils; explains what results from swallowing a piece of living octopus tentacle; and describes a shark attack on a friend.


The book is a sensuous blend of sparkling prose and 150 beautiful illustrations that clarify the science. Each chapter opens with an exciting personal anecdote that leads into the scientific exploration of a distinct inhabitant of the sea world — allowing the reader to experience firsthand the incredible complexity of sea life.


A one-of-a-kind memoir that unfolds in remarkable reaches of ocean few of us can ever visit for ourselves, Sensuous Seas brings the underwater world back to living room and classroom alike. Readers will be surprised at how much marine biology they have learned while being amused.

Eugene H. Kaplan is Axinn Distinguished Professor of Conservation and Ecology at Hofstra University. A recipient of the Herman Melville award for writing on marine subjects, he is the author of nine books, including Problem Solving in Biology and two Peterson Field Guides, one on coral reefs of the Caribbean and the other on seashores of the Southeastern United States and the Caribbean.

"Kaplan actually does the things that many others will ultimately have left on their 'to do' lists. He chases octopuses with his students, dives to the edge of the abyss in a research submarine, and eats things most travelers would never consider. He is part Indiana Jones, part Richard Feynman, and part Woody Allen."—Paul Billeter, College of Southern Maryland

"Highly entertaining. This book really is a celebration of biodiversity."—John Kricher, Wheaton College