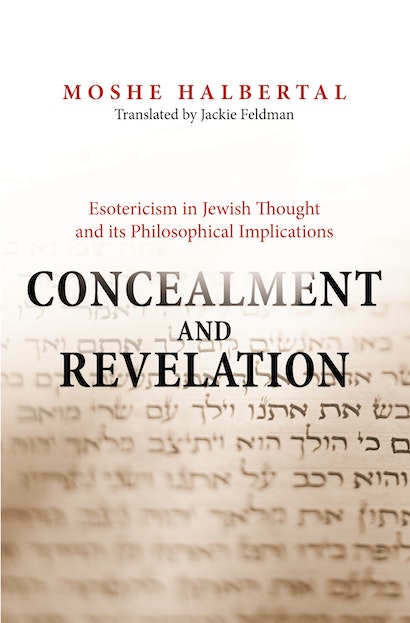 During the twelfth and thirteenth centuries, great new trends of Jewish thought emerged whose widely varied representatives — Kabbalists, philosophers, and astrologers — each claimed that their particular understanding revealed the actual secret of the Torah. They presented their own readings in a coded fashion that has come to be regarded by many as the very essence of esotericism. Concealment and Revelation takes us on a fascinating journey to the depths of the esoteric imagination. Carefully tracing the rise of esotericism and its function in medieval Jewish thought, Moshe Halbertal’s richly detailed historical and cultural analysis gradually builds conceptual-philosophical force to culminate in a masterful phenomenological taxonomy of esotericism and its paradoxes.


Halbertal concludes that, through the medium of the concealed, Jewish thinkers integrated into the heart of the Jewish tradition diverse cultural influences such as Aristotelianism, Neoplatonism, and Hermeticisims. And the creation of an added concealed layer, unregulated and open-ended, became the source of the most daring and radical interpretations of the tradition.

Moshe Halbertal is professor of philosophy at the Hebrew University of Jerusalem, a fellow at the Shalom Hartman Institute, and the Gruss Professor at New York University Law School. He is the author of People of the Book and the coauthor (with Avishai Margalit) of Idolatry.

"Halbertal explains complex issues clearly and gracefully, moving smoothly from dense kabbalistic passages to abstruse texts on medieval philosophy in a way that allows the unspecialized reader to follow his train of thought without plumbing the depths of each theological system to which he refers."—Jewish Book World

"This concise and brilliant book . . . provides great insight into individual thinkers like Ibn Ezra, whose astrological beliefs are frequently overlooked by his readers, and Rambam, whose explicit esotericism has perplexed readers for centuries. . . . A translation of the 2001 Hebrew edition, this very scholarly yet highly readable work will be recognized as a masterful work for many years to come."—Tradition

"Halbertal's book outlines a challenging theory in the intellectual history of Jewish creativity. He does not rely on new material but offers a superb interpretation of available material. This book undoubtedly represents a major contribution to the discourse on the character and the varieties of ancient and medieval Jewish thought."—Dov Schwartz, Journal of Religion

"Moshe Halbertal's book will be a revelation to anyone interested in religious, philosophical, psychological, or political concealment. It has wide implications for the political craving for transparency, and dazzling insights into depth psychology (such as Freud's) and esoteric tendencies in philosophy (such as Wittgenstein's). The book manifests not only immense learning and virtuosity in reading Jewish texts but also genuine wisdom."—Avishai Margalit, Institute for Advanced Study

"This is the most conceptually penetrating book that I can imagine on concealment and revelation in premodern Jewish thought. An original foray into a subject that has not been well developed, it has the makings of a classic. In particular, the essay on esotericism is rich and substantial. There can be no question of the book's brilliance."—Noah Feldman, author of Divided by God

"Original, consistently interesting, and thought-provoking. This book exhibits the author's knack for synthesizing complicated technical material with clarity and verve, and making it accessible to both scholars in adjacent fields and to general readers."—Bernard Septimus, Harvard University

"This book's taxonomy of esoteric knowledge and attempt to establish its importance both as a thing in itself and as an object of study are absolutely fascinating and indeed captivating. The book made an important aspect of medieval Jewish intellectual and spiritual life much less forbidding to me than it had been before, and it should make similar bodies of esoteric knowledge and esoteric movements—like late antique gnosticism and late medieval Christian mysticism—more approachable also."—William Chester Jordan, Princeton University