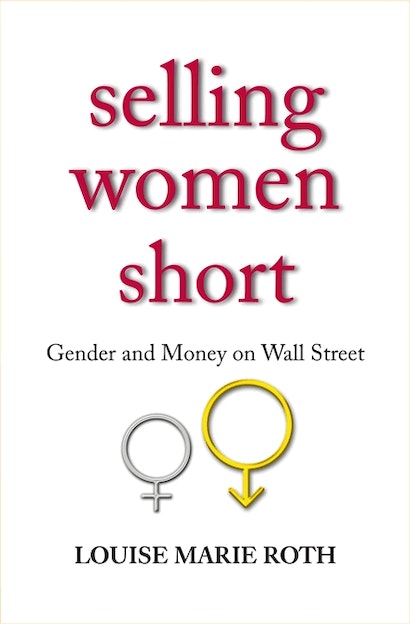 Rocked by a flurry of high-profile sex discrimination lawsuits in the 1990s, Wall Street was supposed to have cleaned up its act. It hasn’t. Selling Women Short is a powerful new indictment of how America’s financial capital has swept enduring discriminatory practices under the rug.


Wall Street is supposed to be a citadel of pure economics, paying for performance and evaluating performance objectively. People with similar qualifications and performance should receive similar pay, regardless of gender. They don’t. Comparing the experiences of men and women who began their careers on Wall Street in the late 1990s, Louise Roth finds not only that women earn an average of 29 percent less but also that they are shunted into less lucrative career paths, are not promoted, and are denied the best clients.

Selling Women Short reveals the subtle structural discrimination that occurs when the unconscious biases of managers, coworkers, and clients influence performance evaluations, work distribution, and pay. In their own words, Wall Street workers describe how factors such as the preference to associate with those of the same gender contribute to systematic inequality.


Revealing how the very systems that Wall Street established ostensibly to combat discrimination promote inequality, Selling Women Short closes with Roth’s frank advice on how to tackle the problem, from introducing more tangible performance criteria to curbing gender-stereotypical client entertaining activities. Above all, firms could stop pretending that market forces lead to fair and unbiased outcomes. They don’t.

Louise Marie Roth is Assistant Professor of Sociology at the University of Arizona.

"This research will be helpful to women if powerful Wall Street management learns of the findings and takes action."—Mary Whaley, Booklist

"This book reveals that we still have a long way to go regarding gender equality. . . . While blatant discrimination based on gender and race has virtually disappeared in politically correct American businesses, a more subtle ad widespread discrimination remains. . . . This readable account concludes by offering recommendations to help businesses come an even longer way toward true gender equality."—Library Journal

"Selling Women Short is a thoughtful examination of how ostensibly merit-based systems can result in unequal outcomes."—Brook Masters, Financial Times

"Highly recommended. . . . Louise Marie Roth provides a valuable addition to the literature on the earnings gap between women and men. . . . The reader gains a multifaceted description and statistical analysis of factors affecting careers of both men and women, including the very successful."—Choice

"Roth's well-written, well-researched book deftly integrates qualitative and quantitative data in a manner that makes it accessible to a variety of audiences who are interested in the topic of pay inequality."—Sarah Y. Moore, International Review of Modern Sociology

"Clearly written in jargon-free and accessible language, it should appeal to a general audience, as well as being suitable for either undergraduate- or graduate-level courses in gender, labor, or economic sociology. It could also productively be used in business and finance classes at the graduate or undergraduate level. Managers or university administrators interested in combating gender inequality could learn from this book as well. . . . I highly recommend the book as a significant contribution to our understanding of the subtle ways in which discrimination operates on Wall Street and beyond."—Abigail C. Saguy, American Journal of Sociology

"[T]his is a highly teachable book that could be assigned in economics, business, labor, and women's studies courses at either the undergraduate or graduate levels. . . . The combination of the academic study with the journalistic account should lead to a spirited discussion among students of the ways in which the structures of organizations allow people to realize opportunity or limit their success."—Swan Yohn, Feminist Economics

"A fascinating (and depressing) account of what goes on on Wall Street. The personal histories and reports of experience are vivid and carry the story well."—Lotte Bailyn, Massachusetts Institute of Technology, author of Breaking the Mold: Redesigning Work for Productive and Satisfying Lives

"This first-rate work is poised to join a small circle of influential books tackling the question of how gender inequality persists amid the avowedly merit-based segments of the American economy. Clearly presented and written in an engaging style, Selling Women Short is the only book I have seen that compares 'successful' and 'derailed' women and men, thus making it possible to disentangle the influence of gender from other, more 'gender neutral' factors that shape the career trajectories of workers in high-powered jobs."—Kathleen Gerson, New York University, coauthor of The Time Divide: Work, Family, and Gender Inequality