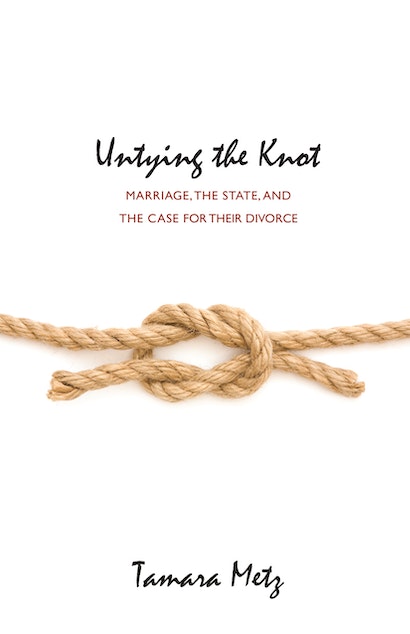 Marriage is at the center of one of today’s fiercest political debates. Activists argue about how to define it, judges and legislators decide who should benefit from it, and scholars consider how the state should protect those who are denied it. Few, however, ask whether the state should have anything to do with marriage in the first place. In Untying the Knot, Tamara Metz addresses this crucial question, making a powerful argument that marriage, like religion, should be separated from the state. Rather than defining or conferring marriage, or relying on it to achieve legitimate public welfare goals, the state should create a narrow legal status that supports all intimate caregiving unions. Marriage itself should be bestowed by those best suited to give it the necessary ethical authority — religious groups and other kinds of communities. Divorcing the state from marriage is dictated by nothing less than basic commitments to freedom and equality.


Tracing confusions about marriage to tensions at the heart of liberalism, Untying the Knot clarifies today’s debates about marriage by identifying and explaining assumptions hidden in widely held positions and common practices. It shows that, as long as marriage and the state are linked, marriage will be a threat to liberalism and the state will be a threat to marriage. An important and timely rethinking of the relationship between marriage and the state, Untying the Knot will interest political theorists, legal scholars, policymakers, sociologists, and anyone else who cares about the fate of marriage or liberalism.

Tamara Metz is assistant professor of political science and humanities at Reed College.

"Marriage as an ethical and social relationship is to reside outside the state's reach. Metz convincingly defends this position by using traditional liberal values alongside feminist analyses to critique and reject justifications of 'established' marriage found in Locke, Mill, Susan Moller Okin, and US legal opinions."—Choice

"Tamara Metz has written an important book that makes a provocative and ultimately persuasive argument for getting the state out of the marriage business. . . . I am very impressed with the persuasiveness of Metz's overarching argument and with the respectful and non-dismissive way in which she addresses the normative concerns of religious people, as well as the insights of feminist theorists. This book definitely makes a contribution to the literature on marriage, and it deserves a wide reading."—R. Claire Snyder-Hall, Law and Politics Book Review

"This lucid, thoughtful, and cogently argued book makes a significant contribution to the literature on marriage. It will advance debates over marriage law beyond the question of which form of marriage the state should recognize to the deeper question of why the state should recognize marriage at all. Specialists in social and political philosophy, feminist philosophy, and the history of liberal thought will profit from it, but it is also accessible to the student or general reader."—Elizabeth Brake, Philosophy in Review

"Metz's focus on the meaning side of marriage provides a timely guide to understanding contemporary marriage debates. . . . Her book should be of interest to the wider audience of readers who feel some stake in the ongoing marriage debates."—Linda McClain, Political Science Quarterly

"Untying the Knot is a worthwhile read for anyone interested in the current struggles over the nature, meaning, and significance of marriage, and it borders on being a must-read for anyone with a serious interest in the relationship between liberalism and marriage."—Eric M. Cave, Social Theory and Practice

"[T]his book . . . is a forceful volley that effectively changes the terms of the marriage debate, forcing us to argue about fundamental assumptions as well as implications."—Michele Pridmore-Brown, European Legacy

"An obvious strength of this work is Metz's clarity of argument, both in terms of her careful and considered analysis and her exceptionally clear writing style. Her prose is refreshingly enjoyable to read, and spells out her case at a measured pace. Whether or not you agree with the argument Metz presents, you will understand it."—Amy Watson, LSE Politics and Policy blog

"In her thought-provoking book, Metz makes a compelling case. . . . This is a straightforward and important book."—Timothy J. Woods, INTAMS Review

"In clear and jargon-free writing, Tamara Metz makes a persuasive case for the separation of marriage and the state. Readers who pick up this book to inform themselves about the same-sex marriage debate will be led to wonder why the state involves itself in marriage at all."—Shelley Burtt, author of Virtue Transformed

"This provocative and timely book makes an important contribution to our understanding of both liberal political theory and what marriage law should be. The writing is clear, succinct, and a pleasure to read. This book is essential reading for everyone interested in the family, political theory, public policy, or law."—Mary Lyndon Shanley, Vassar College