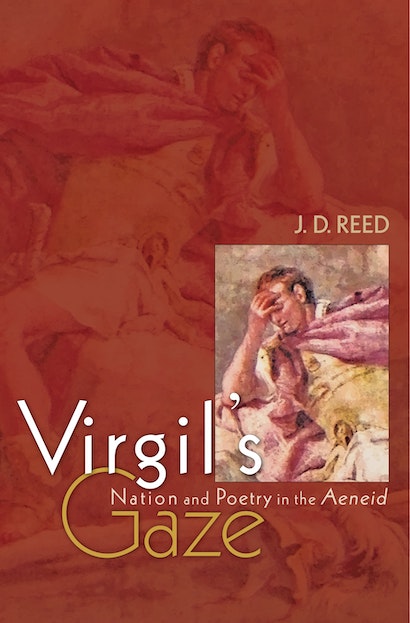 Virgil’s Aeneid invites its reader to identify with the Roman nation whose origins and destiny it celebrates. But, as J. D. Reed argues in Virgil’s Gaze, the great Roman epic satisfies this identification only indirectly — if at all. In retelling the story of Aeneas’ foundational journey from Troy to Italy, Virgil defines Roman national identity only provisionally, through oppositions to other ethnic identities — especially Trojan, Carthaginian, Italian, and Greek — oppositions that shift with the shifting perspective of the narrative. Roman identity emerges as multivalent and constantly changing rather than unitary and stable. The Roman self that the poem gives us is capacious — adaptable to a universal nationality, potentially an imperial force — but empty at its heart. However, the incongruities that produce this emptiness are also what make the Aeneid endlessly readable, since they forestall a single perspective and a single notion of the Roman.


Focusing on questions of narratology, intertextuality, and ideology, Virgil’s Gaze offers new readings of such major episodes as the fall of Troy, the pageant of heroes in the underworld, the death of Turnus, and the disconcertingly sensual descriptions of the slain Euryalus, Pallas, and Camilla. While advancing a highly original argument, Reed’s wide-ranging study also serves as an ideal introduction to the poetics and principal themes of the Aeneid.

J. D. Reed is Assistant Professor of Greek and Latin at the University of Michigan, and the editor of Bion of Smyrna: The Fragments and the Adonis.

"Point of view or perspective, in all its forms, has been a chief concern of Virgilian criticism for decades now, and Reed's book shows that there is yet much to be discovered in these well-traveled areas of investigation, especially where narratology meets intertextuality. . . . [T]he book both informs and provides much to contemplate."—Brian W. Breed, New England Classical Journal

"Reed is an excellent interweaver of citations. He seems to have photographic recall of every metaphor ever penned in Hellenistic literature. His elucidation of the tangled ethnographies of peoples and cities of the ancient world is admirably precise. And he is correct to note the ironies that Virgil has built into his foundational epic."—Anthony Esolen, Claremont Review of Books

"This book has many strengths. The close readings it extracts from the Aeneid's intertextuality with early Roman poetry, especially Naevius and tragedy, are often exciting."—Brian W. Breed, New England Classical Journal

"The aestheticizing of death—often related to images of male beauty—and the quest for a national identity are both important aspects of the Aeneid. Through J. D. Reed's original approach, we are now able to understand that together they form a coherent strategy of epic representation."—Alessandro Barchiesi, University of Siena and Stanford University

"A study on the presentation of national identity in the Aeneid is long overdue. The topic is extremely important and complex, and it has been neglected for much too long. We should therefore all be grateful to J. D. Reed for tackling it here. The book should appeal to a large audience and not only classicists."—Andreola Rossi, Amherst College

"This is one of the richest and most exciting studies of Virgil that I have read in some time. I learned something new about the Aeneid on every page, and my understanding of the poem has been considerably deepened by Reed's work. Virgil's Gaze will be rewarding and comprehensible to all committed readers of Virgil's poem in translation and in the original."—Andrew Feldherr, Princeton University