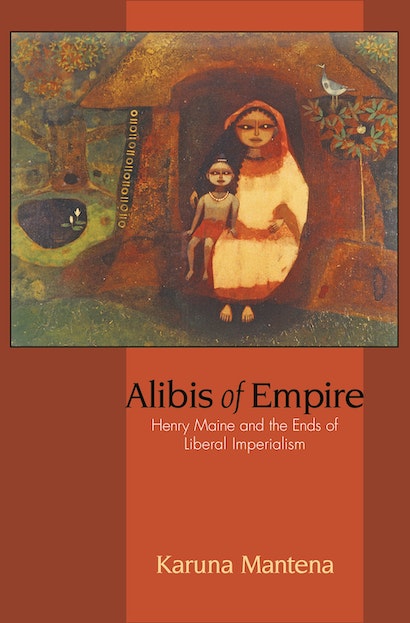 Alibis of Empire presents a novel account of the origins, substance, and afterlife of late imperial ideology. Karuna Mantena challenges the idea that Victorian empire was primarily legitimated by liberal notions of progress and civilization. In fact, as the British Empire gained its farthest reach, its ideology was being dramatically transformed by a self-conscious rejection of the liberal model. The collapse of liberal imperialism enabled a new culturalism that stressed the dangers and difficulties of trying to “civilize” native peoples. And, hand in hand with this shift in thinking was a shift in practice toward models of indirect rule. As Mantena shows, the work of Victorian legal scholar Henry Maine was at the center of these momentous changes. Alibis of Empire examines how Maine’s sociotheoretic model of “traditional” society laid the groundwork for the culturalist logic of late empire. In charting the movement from liberal idealism, through culturalist explanation, to retroactive alibi within nineteenth-century British imperial ideology, Alibis of Empire unearths a striking and pervasive dynamic of modern empire.

"Mantena carefully situates [Henry] Maine in political debates of the Britain of his time. Her study features excellent accounts of the luminaries of liberal imperialism and their critics before turning to the writings of Maine, particularly his analysis of 'traditional societies' and the implications of that analysis for the revision of imperial law codes and for a new treatment of property. . . . [A] striking debut."—Choice

"It is Mantena's earnest engagement with the question of a liberal empire's invariable ends that will appeal to a set of readers well beyond the circle of political theorists, intellectual historians, and students of the British empire who are the target audience for this book, and for whom this book is necessary reading."—Ishita Pande, Economic & Political Weekly

"[H]er book is enormously rich. . . . Mantena's wide-ranging erudition amply bolsters her thesis . . . [which] serves as an invaluable corrective to flattened, univocal, and static accounts of the relationship between liberalism and imperialism. . . . She has written an extraordinary book that cannot be ignored."—Daniel I. O'Neill, Perspectives on Politics

"Mantena's main thesis serves as an invaluable corrective to flattened, univocal, and static accounts of the relationship between liberalism and imperialism. . . . Mantena has broken new intellectual ground in (he study of empire. Hers is a bold and novel argument that should become required reading for anyone interested in modern imperialism. In this sense, whether subsequent scholarly treatments of the topic concur with Mantena's argument in all respects is immaterial. She has written an extraordinary book that cannot be ignored."—Daniel I. O'Neill, Political Theory

"Alibis of Empire is a sophisticated work of intellectual history. . . . [D]eep analysis of Maine's work is the heart of the book, and Mantena undertakes it with great skill and confidence."—Mark Doyle, Canadian Journal of History

"This will add much weight to current critiques of a resurgent imperialism, in America not least. The breadth of scholarship and depth of insight in her work is commendable."—Julia Stapleton, History of Political Thought

"In this unprecedented book, Karuna Mantena engages in a dialogue with the history of political thought, the history of nineteenth-century imperialism, and the genealogies of modern social theory. It will be widely influential."—Seyla Benhabib, Yale University

"Karuna Mantena provides the first comprehensive account of the centrality of Henry Maine in the transformation of British imperial ideology in the late nineteenth century. With great insight and erudition, Mantena elucidates the connections between Maine's sociotheoretic model of traditional society and the ideology and practice of British indirect rule."—Mahmood Mamdani, Columbia University

"Alibis of Empire offers indispensable correctives to the standard intellectual histories of empire. It shifts the focus from political to social theory and concentrates attention on Henry Maine, a figure whose contribution to British imperial ideology was probably greater than that of any other thinker of his time. The book is written with economy and subtlety, and its argument is persuasive and important. It will be of great interest to a variety of readers, especially intellectual historians, historians of empire, and political theorists."—David Armitage, Harvard University

"This is an important contribution to scholarship on the British empire, one that provides new insights into debates about the changing nature of colonial discourse in nineteenth-century England, the relative strengths of social and political theory at the time and well into the twentieth century, the meaning of 'culture,' and the legacy of Henry Maine's writings for English colonial practice in India and beyond."—Barbara Arneil, University of British Columbia