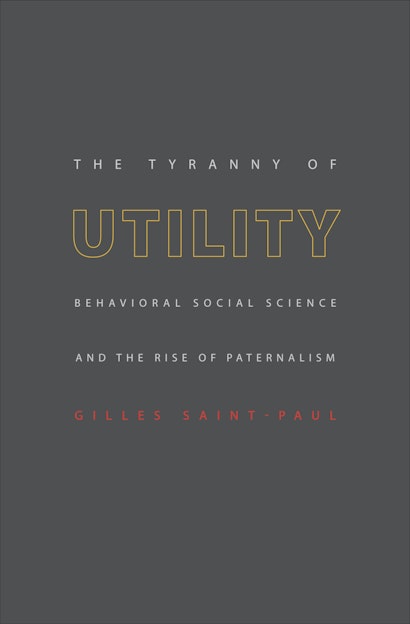 The general assumption that social policy should be utilitarian — that society should be organized to yield the greatest level of welfare — leads inexorably to increased government interventions. Historically, however, the science of economics has advocated limits to these interventions for utilitarian reasons and because of the assumption that people know what is best for themselves. But more recently, behavioral economics has focused on biases and inconsistencies in individual behavior. Based on these developments, governments now prescribe the foods we eat, the apartments we rent, and the composition of our financial portfolios. The Tyranny of Utility takes on this rise of paternalism and its dangers for individual freedoms, and examines how developments in economics and the social sciences are leading to greater government intrusion in our private lives.


Gilles Saint-Paul posits that the utilitarian foundations of individual freedom promoted by traditional economics are fundamentally flawed. When combined with developments in social science that view the individual as incapable of making rational and responsible choices, utilitarianism seems to logically call for greater governmental intervention in our lives. Arguing that this cannot be defended on purely instrumental grounds, Saint-Paul calls for individual liberty to be restored as a central value in our society.


Exploring how behavioral economics is contributing to the excessive rise of paternalistic interventions, The Tyranny of Utility presents a controversial challenge to the prevailing currents in economic and political discourse.

Gilles Saint-Paul is professor of economics at the Toulouse School of Economics. His books include Innovation and Inequality (Princeton).

"The Tyranny of Utility is a courageous and original contribution. In particular, Saint-Paul's analysis of the consequences of post-utilitarianism on individual freedom is highly convincing."—Arnaud Vaganay, LSE's Politics and Policy blog

"[T]houghtful, challenging, and intellectual honest. . . . [T]his is a serious book and certainly not to be missed by scholars and public policy decision makers."—Choice

"Saint-Paul's contribution to the current policy debate regarding paternalism is timely, and society's embrace of new restrictions of individual liberty—coupled with its diminishing emphasis on individual responsibility—is troubling, particularly as such restrictions are done in the name of pursuing an ill-defined and problematic conception of individual welfare. Although we ought to distinguish between debates about the value of a utilitarian state and the value of a paternalistic state, Saint-Paul's call to slow down is welcome to those of us who felt that the move from behavioural economics to state paternalism happened much too quickly."—Brynn F. Welch, Economics and Philosophy

"Saint-Paul writes clearly, knows his economic theories inside and out, sees all the arguments in favour of the behavioural economic approach that is currently on the rise, and is scared. . . . What I found in favour of this book is that Saint-Paul is not a mindless theorist or a blind opponent of behavioural economics: he himself contributes to the literatures he is discussing and he is part of the policy wars in Europe, giving him good insights into the use of economic arguments in policy debates."—Paul Frijters, Economic Record

"Saint-Paul stands courageously in the middle of the new road to serfdom, trying to stop the heavy traffic being nudged along on it. He alerts us to the greatest threat to liberty since communism—our good will, our paternal-maternal desire to prevent anyone, anywhere from exercising their free will mistakenly. Let us pray Saint-Paul succeeds. If the unintentional enemies of liberty are open to reason, he will."—Deirdre McCloskey, author of Bourgeois Dignity: Why Economics Can't Explain the Modern World

"This is a fresh and original book about the fundamentals of how we approach economic policy. Saint-Paul presents a strong and powerful message about the alarming paternalism implicit in some currently fashionable approaches to economics."—Diane Coyle, author of The Soulful Science: What Economists Really Do and Why It Matters

"This accessible book provides a well-argued case against much that is currently fashionable, particularly in behavioral economics. Ranging over issues in philosophy, political science, psychology, economics, and public policy, the book deals adventurously with big issues while setting out the economic arguments intertwined with them. A very enjoyable and highly provocative book."—John Driffill, coauthor of Economics

"This book will enlighten and infuriate economists in equal measure—which is what an intelligent book should do. It makes an important contribution and is a good read."—Richard Disney, University of Nottingham