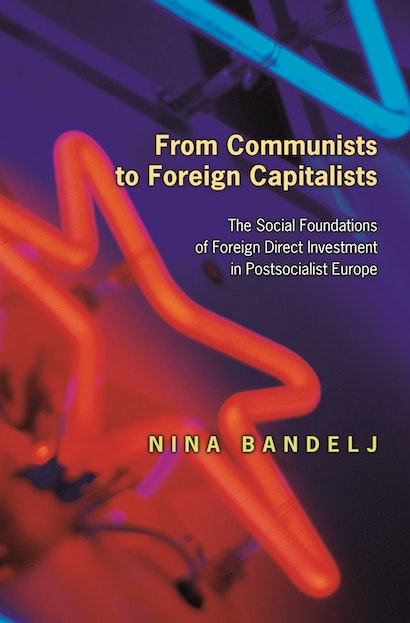 From Communists to Foreign Capitalists explores the intersections of two momentous changes in the late twentieth century: the fall of Communism and the rise of globalization. Delving into the economic change that accompanied these shifts in central and Eastern Europe, Nina Bandelj presents a pioneering sociological treatment of the process of foreign direct investment (FDI). She demonstrates how both investors and hosts rely on social networks, institutions, politics, and cultural understandings to make decisions about investment, employing practical rather than rational economic strategies to deal with the true uncertainty that plagues the postsocialist environment.


The book explores how eleven postsocialist countries address the very idea of FDI as an integral part of their market transition. The inflows of foreign capital after the collapse of Communism resulted not from the withdrawal of states from the economy, as is commonly expected, but rather from the active involvement of postsocialist states in institutionalizing and legitimizing FDI. Using a wide array of data sources, and combining a macro-level account of national variation in the liberalization to foreign capital with a micro-level account of FDI transactions in the decade following the collapse of Communism in 1989, the book reveals how social forces not only constrain economic transformations but also make them possible.

From Communists to Foreign Capitalists is a welcome addition to the growing literature on the social processes that shape economic life.

Nina Bandelj is assistant professor of sociology and faculty associate at the Center for the Study of Democracy at the University of California, Irvine.

"While the book is a must read for scholars of postsocialism, it will also be of interest to economic sociologists and scholars and students of globalization, capital mobility and foreign investment, economic change, and economic development."—Christy M. Glass, Labour

"Nina Bandelj has produced an outstanding piece of work on the postsocialist transformation in Eastern and Central Europe. . . . The theoretical arguments are sophisticated and nuanced, and the empirical research behind them is outstanding. I commend the book to anyone interested in the structure of markets, the processes underlying foreign direct investment, and the processes of globalization more generally. It will be essential reading not only to those interested in postsocialist transitions but also to economic sociologists in general and to anyone interested in the social construction of markets."—Doug Guthrie, Administrative Science Quarterly

"Nina Bandelj's first book is powerful and persuasive. Its strength comes from the author's personal involvement with the subject matter. . . . The book contributes significantly to the literature on postsocialist transformation and builds upon well-known themes that have been developed since the 1990s to analyze the deep changes of the current decade. . . . Definitely, this is a must read for both graduate students who are approaching the study of economic geography, economic sociology, globalization, and Eastern European studies and established scholars who are working on postsocialist transformation."—Christian Sellar, Economic Geography

"Capital is the fuel of the modern economy. After the fall of the Iron Curtain, the former socialist countries had to import this fuel from capital-rich Western countries. Which countries could attract the most foreign direct investment and why? In her outstanding study, Nina Bandelj shows that the diffusion of foreign direct investment is a socially embedded process in which decisions in an uncertain environment are shaped by social, cultural, and political forces. Arguing clearly and gracefully, she skillfully applies the toolkit of economic sociology to one of the most pressing questions of the global economy."—Jens Beckert, Max Planck Institute for the Study of Societies

"Pundits tell us that globalization has now made the world flat, and rendered the state obsolete. Nina Bandelj shows that both of these truisms are false, explaining how social networks, institutions, politics, and culture deeply affect the flow of foreign direct investment into eleven postsocialist countries. Her thoughtful analysis will be of interest to anyone who wants to understand globalization, economic development, and Central and Eastern Europe since 1989."—Bruce G. Carruthers, Northwestern University

"In this compelling account of the origins of foreign direct investment in postsocialist Eastern Europe, Nina Bandelj explores a critically important—but typically overlooked—component of economic transition: the centrality of social relations to what may appear to be a purely economic exchange. Anyone interested in transition, Eastern Europe, or economic sociology more generally will want to add this to their must-read list."—Lisa A. Keister, Duke University

"This book is a major contribution to economic sociology and the study of the postcommunist transformation. It makes creative and fundamental theoretical points and has empirical punch. It will stand out in the literature on foreign direct investment with its originality."—Ákos Róna-Tas, University of California, San Diego