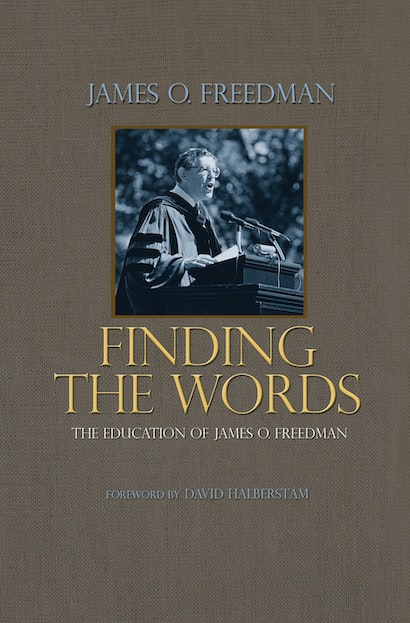 James Freedman, the fifteenth president of Dartmouth College, began life in a struggling middle-class Jewish family in a provincial industrial New Hampshire town. By the time of his death from cancer in March 2006, he was one of the most celebrated educational leaders of his generation, perhaps of the twentieth century. Finding the Words is Freedman’s account of the first twenty-seven years of this astonishing trajectory in a life made difficult by depression, but sustained throughout by a love of books and learning, a life that would transform the culture of American higher education.


His mother’s fierce and bruising ambition instilled in him an overwhelming drive to leave his mark upon the world. His father, a revered high-school English teacher who was timid outside the classroom, introduced him to the rich world of literature — and also passed on to him his doubts and insecurities. Freedman retraces his intellectual formation as a student, educator, scholar, and leader, from his early?obsession with book collecting through his undergraduate years at Harvard and his professional training at Yale Law School. This same passion for language and ideas defined Freedman’s leadership at Dartmouth, where he deftly countered lingering anti-Semitism, fought entrenched interests to open the way for women and minorities, reformed and revitalized the curriculum, and boldly reconceived the school’s campus.


This moving and inspiring book vividly depicts the formative years of a man nourished by lifelong learning, whose rise from humble beginnings to heights of achievement will serve as a model for generations to come.

"While the book traces in powerful and affecting language Freedman's personal journey—from isolated, self-doubting, New Hampshire Jew to accomplished Yale Law School graduate—it also paints a broader equally affecting picture of the timeless power of education in such a transformation. . . . Beyond its heartfelt lessons, the book offers a joyful reading experience. . . . As he was in life, Freedman, in his posthumously published memoir, remains a passionate advocate of the power of ideas and the importance of a liberal arts education in a society that can only thrive and survive if its discourse is civilized and informed."—Bill Pruden, National Association for College Admission Counseling

"Beyond its heartfelt lessons, the book offers a joyful reading experience. Whether paying homage to the memorable teachers whose influence proved to be life long or recalling with obvious delight the books and authors that opened up new worlds for a shy boy with big ears, on page after page, Freedman, as the title suggests, finds the words that illustrate, in the most human terms, the power and importance of education for both a society and its citizens."—Bill Pruden, NACAC News

"This is a moving and fascinating account of a bright and ambitious young Jew trying self-consciously to break out of small-town New England to achieve greatness. The story is heroic, but it is not without pathos. This is really a book about books—how beautiful they are, and how the examined life cannot be lived without them, since they have been the mirror in which Freedman learned to see himself."—Stanley N. Katz, Princeton University

"From an early age, Freedman fell in love with words and with books, and his book is steeped with accounts of what he read and how it affected him. The book is written by a mind formed by scholarship and—in the most powerful way that I can recall—demonstrates how such a mind is formed. It is an important, indeed vital, contribution to our understanding of liberal education and of the educated mind."—Howard Gardner, Harvard Graduate School of Education