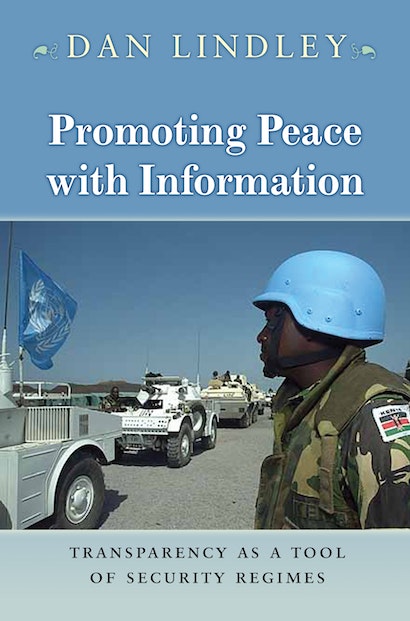 It is normally assumed that international security regimes such as the United Nations can reduce the risk of war by increasing transparency among adversarial nations. The more adversaries understand each other’s intentions and capabilities, the thinking goes, the less likely they are to be led to war by miscalculations and unwarranted fears. But how is transparency provided, how does it actually work, and how effective is it in preserving or restoring peace? In Promoting Peace with Information, Dan Lindley provides the first scholarly answer to these important questions.


Lindley rigorously examines a wide range of cases, including U.N. peacekeeping operations in Cyprus, the Golan Heights, Namibia, and Cambodia; arms-control agreements, including the Nuclear Non-Proliferation Treaty; and the historical example of the Concert of Europe, which sought to keep the peace following the defeat of Napoleon in 1815. Making nuanced arguments based on extensive use of primary sources, interviews, and field research, Lindley shows when transparency succeeds in promoting peace, and when it fails. His analysis reveals, for example, that it is surprisingly hard for U.N. buffer-zone monitors to increase transparency, yet U.N. nation-building missions have creatively used transparency to refute harmful rumors and foster democracy.


For scholars, Promoting Peace with Information is a major advance into the relatively uncharted intersection of institutionalism and security studies. For policymakers, its findings will lead to wiser peacekeeping, public diplomacy, and nation building.

Dan Lindley is Assistant Professor of Political Science and a Fellow at the Joan Kroc Institute for International Peace Studies at the University of Notre Dame.

"The book is especially impressive in the execution of the research. . . . There is something for many (not quite everyone), and readers will profit by learning about topics that they thought they already knew, as well as other topics that they could stand to learn more about"——Paul F. Diehl, Perspectives on Politics

"Transparency has received increased theoretical attention, but we need to understand how and when it supports or impedes cooperation among nations. Promoting Peace with Information provides that empirical investigation. Dan Lindley is scrupulously fair in his presentation of case-study materials and his evaluation of his hypotheses. Readers ought to feel they are in sure, capable, and unbiased hands."—Charles Lipson, University of Chicago

"Promoting Peace with Information is a very thorough and careful study of the effects of transparency on cooperation in post-conflict situations. Transparency is a central component of current theories of what makes cooperation possible and of contemporary practice in peacekeeping and conflict resolution, but its effects have seldom been systematically assessed. Dan Lindley makes a real contribution to our understanding of this vital issue."—Andrew Kydd, University of Pennsylvania