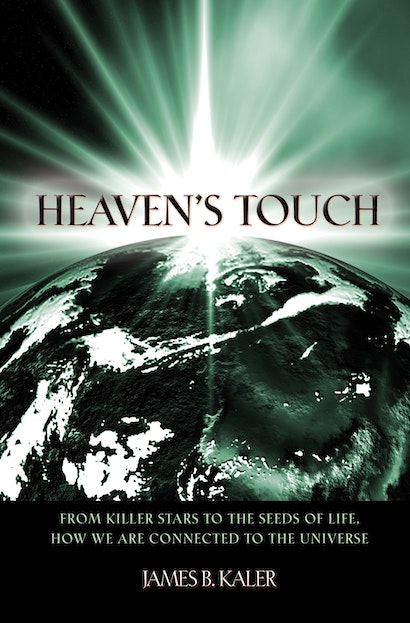 Did you know that as you read these words showers of high-speed particles from exploding stars are raining down on you? As you gaze into the starry sky, you might feel isolated from the Universe around you—but you’re not. This book reveals the startling ways life on Earth is touched by our cosmic environment, and demonstrates why without such contact, life itself wouldn’t be possible.

Heaven’s Touch embarks on an unforgettable journey across the cosmos, beginning in near space with a look at the gentle ebb and flow of lunar and solar tides. Acclaimed astronomer James Kaler describes their subtle effects on our world and also explores the Sun’s more potent influences, such as solar storms that cause auroras, give comets their tails, and knock out power grids on Earth. He ventures across the Solar System to consider how the planets can act to produce climate change, even global disaster. Kaler shows how Jupiter’s gravity can throw asteroids toward potentially devastating collision with Earth, and how even our whole Galaxy might hurl comet storms at us. He then takes us into deepest space to describe the cosmic rays launched at us from exploding stars, and considers not just how these exploders might harm us, but how they also join together in the creation of stars and how they serve to populate the Universe with the very building blocks of life.

Informative and entertaining, Heaven’s Touch reveals how intimately connected we really are with the dynamic Universe in which we live.

James B. Kaler is professor emeritus of astronomy at the University of Illinois, Urbana-Champaign. His many books include The Cambridge Encyclopedia of Stars and The Hundred Greatest Stars.

"Kaler's writing is enthusiastic, and he conveys his own wonder and excitement at the myriad mysteries of the universe. His description of the effect of the sun and moon on the tides is thorough, as are his explanations of the source of the sun's energy and how an asteroid belt between Mars and Jupiter was discovered."—Publisher's Weekly

"James Kaler has crafted an outstanding short introduction to astronomy and cosmology by adopting a point of view that I have not seen before in a popular account of the cosmos. . . . Heaven's Touch is a passionate account both of humanity's tangible contact with the Universe at large and the profound influence of the Universe on life on Earth."—Simon Mitton, Times Higher Education

"With the avuncular Professor as our guide, we are taken on a whirlwind tour of the Universe as we know and understand it and how, possibly, we came to be and very nearly not to be. He has a pleasingly straightforward style and, wherever possible, tries to steer clear of complex scientific jargon. . . . Professor Kaler has attempted to enliven what could be a complicated and uninteresting topic, and through linking everything together via his well explained engaging text, he has admirably succeeded."—Astronomy Now

"This very readable book presents the many and various ways Earth and life here are connected to and affected by the universe, on scales ranging from local (within Earth's solar system) to cosmic (back to the big bang). Kaler, an experienced astronomy educator and researcher, provides a fascinating account of how human existence is due to events that happened long, long ago and far, far away. . . . For professional astronomers tempted to write a popular yet accurate account of their pet interest, this book is a lesson in how to do it superbly."—Choice

"Read this book. You will find yourself listening and capturing information from the mind of someone who treats science as more of an ethereal topic; not as a bunch of formulas, but as a thing of beauty. Anyone can read Heaven's Touch, from the hardcore scientist to the newly-introduced amateur, and come out with a better understanding of the subject."—Francine Jackson, Planetarian

"Heaven's Touch is a stimulating, clarifying work of popular astronomy and cosmology."—Maui News

"Written in a style which reduces complex processes into manageable bites, yet containing numerous facts and figures, this book works well as good read and will also perform as a reference book, allowing the reader to dip in and out if a short explanation of a particular event is required. Overall this is a well written, eye opening account of how we are affected by Heaven's Touch."—Phil Brotherwood, FAS Newsletter

"Among the many things I like about Heaven's Touch is that, as scary as some of the cosmic scenarios Kaler depicts may seem, the book's goals . . . are to inspire and inform rather than intimidate. . . . I applaud Kaler's achievement and recommend his book to teachers of astronomy and to their students."—Naomi Pasachoff, Newsletter of IAU Commission 46 on Education and Development

"Jim Kaler, who has passionately and expertly described the stars and their vagaries, now brings the whole Universe—from the tides through hypernovae and gamma-ray bursts—to general readers. His writing is not only clear and straightforward but also correct and up to date, addressing both standard topics and the latest astronomical goodies."—Jay M. Pasachoff, Williams College

"Heaven's Touch examines the physical effects of gravity, radiation, solar storms, asteroid and comet impacts, cosmic rays, supernovae, and gamma-ray bursts on our home planet. Its conclusions are significant: our planet does not exist in isolation but rather is part of a complex planetary, stellar, and galactic system whose influences are profound. I found myself propelled along in the reading."—J. Michael Shull, University of Colorado at Boulder

"Heaven's Touch presents the diverse ways that astronomical objects affect the Earth and humans, beyond their visual appearance in the sky. Kaler is a senior astronomer with an excellent reputation as a researcher, educator, and author. There is a lot of good material here that has not featured in very many popular astronomy books."—Chris Impey, author of The Living Cosmos

"Heaven's Touch contains much of interest that should be informative and engaging to readers."—Donald Brownlee, coauthor of Rare Earth