A comprehensive and authoritative encyclopedia of U.S. political history 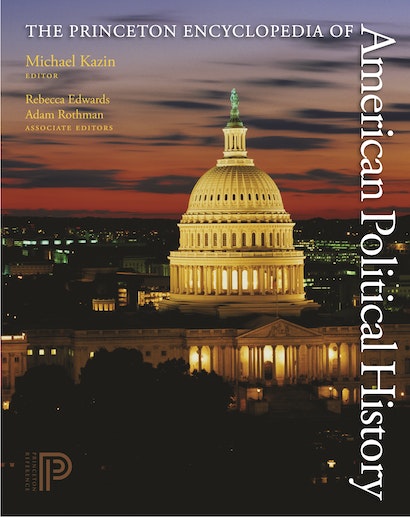 An essential resource for anyone interested in U.S. history and politics, this two-volume encyclopedia covers the major forces that have shaped American politics from the founding to today. Broad in scope, the book addresses both the traditional topics of political history—such as eras, institutions, political parties, presidents, and founding documents—and the wider subjects of current scholarship, including military, electoral, and economic events, as well as social movements, popular culture, religion, education, race, gender, and more.

Each article, specially commissioned for this book, goes beyond basic facts to provide readers with crucial context, expert analysis, and informed perspectives on the evolution of American politics. Written by more than 170 leading historians and social scientists, The Princeton Encyclopedia of American Political History gives students, scholars, and researchers authoritative introductions to the subject’s most important topics and a first step to further research.

Michael Kazin is professor of history at Georgetown University and an expert in U.S. politics and social movements. His books include A Godly Hero: The Life of William Jennings Bryan (Knopf) and The Populist Persuasion: An American History (Basic). Rebecca Edwards is the Eloise Ellery Professor of History at Vassar College. She is the author of Angels in the Machinery: Gender in American Party Politics from the Civil War to the Progressive Era and New Spirits: Americans in the Gilded Age, 1865-1905. Adam Rothman is associate professor of history at Georgetown University and author of Slave Country: American Expansion and the Origins of the Deep South.

"Encyclopedias are both invitations to explore and tools to find particular information. The Princeton Encyclopedia of American Political History amply fulfills both of those functions. . . . [M]any of these contributing historians, journalists, and social scientists are those whose opinions academics seek and cite. . . . [M]asterful. . . . [A]n important source for researchers at all levels to consult for introductory information."—Choice

"[T]his encyclopedia offers accessible, thorough, and enlightening coverage of political history in the U.S. from colonial times through the 'conservative ascendancy' period, which ended 2008 with the election of Barak Obama. . . . The use of varying fonts and types makes the work visually appealing. Highly recommended for those interested in politics and history in public and academic libraries."—Booklist

"Broad in scope, this two-volume encyclopedia covers the major forces that have shaped American politics from the founding to today."—Blackwells Recommends

"[This] is a fine specimen of modern bookwork: the two quarto volumes are well printed on thick paper, the pages are sewn and firmly anchored and the text block is sandwiched between heavy boards. If it is not abused, this set should last a hundred years. It is written in plain English and easy to use."—John Kendall, Reference Reviews

"I can think of no better introduction to American politics than The Princeton Encyclopedia of American Political History. The editors, led by the distinguished historian Michael Kazin, have done a superb job of balancing traditional and innovative approaches to their subject and in assembling essays that are authoritative, insightful, and accessible. This work will quickly become an indispensable guide to the political institutions, ideas, issues, and movements that have shaped and sometimes convulsed the United States across its history. A major accomplishment."—Gary Gerstle, Vanderbilt University

"The Princeton Encyclopedia of American Political History will appeal both to libraries (at the local, school, and university level) and to readers outside the field, as well as to students and teachers at every level."—Jane Dailey, University of Chicago

"Seldom can anyone in any area of American history say that there is not some competing or closely related work in the field. But the editors of this encyclopedia can in fact do so. This is a useful, significant, and enduring reference book in an important area of American history. It will be used by general readers, students from high school through graduate school, and of course scholars."—Jean H. Baker, Goucher College