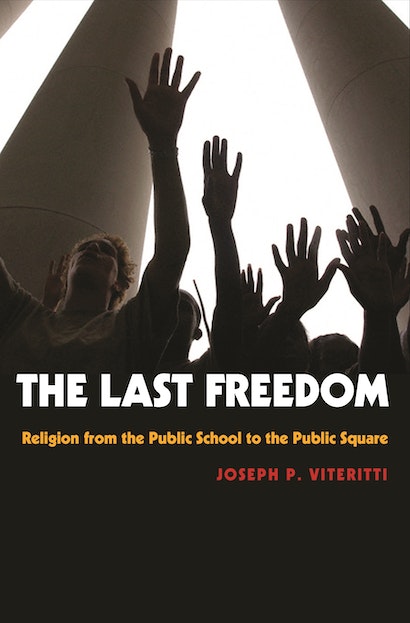 The presidency of George W. Bush has polarized the church-state debate as never before. The Far Right has been emboldened to use religion to govern, while the Far Left has redoubled its efforts to evict religion from public life entirely. Fewer people on the Right seem to respect the church-state separation, and fewer people on the Left seem to respect religion itself — still less its free exercise in any situation that is not absolutely private. In The Last Freedom, Joseph Viteritti argues that there is a basic tension between religion and democracy because religion often rejects compromise as a matter of principle while democracy requires compromise to thrive. In this readable, original, and provocative book, Viteritti argues that Americans must guard against debasing politics with either antireligious bigotry or religious zealotry. Drawing on politics, history, and law, he defines a new approach to the church-state question that protects the religious and the secular alike.


Challenging much conventional opinion, Viteritti argues that the courts have failed to adequately protect religious minorities, that the rights of the religious are under greater threat than those of the secular, and that democracy exacts greater compromises and sacrifices from the religious than it does from the secular. He takes up a wide range of controversies, including the pledge of allegiance, school prayer, school vouchers, evolution, abortion, stem-cell research, gay marriage, and religious displays on public property.


A fresh and surprising approach to the church-state question, The Last Freedom is squarely aimed at the wide center of the public that is frustrated with the extremes of both the Left and the Right.

Joseph P. Viteritti is the Blanche D. Blank Professor of Public Policy at Hunter College, CUNY. His many books include Choosing Equality: School Choice, the Constitution, and Civil Society.

"The book is a piece of excellent scholarship in the service of an argument that is carefully nuanced and balanced."—Clyde Wilcox, Political Science Quarterly

"In his impassioned book, Joseph P. Viteritti asserts that religious freedom is being suppressed by cultural élites....Viteritti finds that most Americans fall into an ambiguous 'hollow middle,' rejecting both rigid secularism and overly intrusive religion. Yet Americans generally favor religion's role in society, unlike the Supreme Court and government, which Viteritti says engineered secularization of public life and the public schools during recent decades."—Richard Ostling, Books and Culture

"Professor Viteritti has charted what he envisions to be a sensible, sensitive middle-of-the road solution to the strife between the Religious Right and the Secular Left...The author's line of argument is well informed and vigorous. I believe The Last Freedom is a valuable addition to the church/state school debate."—R.Murray Thomas, Teachers College Record

"Viteritti is particularly good when examining the inherent contradictions within the religious provisions of the First Amendment... His examinations of constitutional legal theory are fascinating, and his analysis of the Founders' thinking on religion is absolutely brilliant, a must read for any serious student of American religion."—Andrew Preston, Clare College, Cambridge University, 49th Parallel

"For those hoping to better understand not only our current debates about faith, politics, education, and citizenship, but also the history of America's experiment with religious freedom under and through law, The Last Freedom is a welcome and illuminating work."—Richard W. Garnett, First Things

"Viteritti, a veteran of the school choice battles in New York City, bring[s] a wealth of practical experience to [his] views on religion and government in America. . . . [A] well-written account . . . valuable contributions to our understanding of the productive tension between individual liberty and public virtue in America's rapidly diversifying religious marketplace."—Scott Erwin, The American Interest

"In a simple, yet compelling read, Joseph Viteritti chronicles the parallel movements of religion and politics in the United States from the pilgrims to the present, inviting the reader to realize just how seriously our citizens consider religion."—Nancy Gilroy, Catholic Spirit

"[Makes] the provocative case . . . that seriously religious Americans constitute only a small minority and that the vast majority, despite their superficial religiosity, lead secular lives with essentially secular values. In Viteritti's view, it is 'extreme secularism,' accepted by this get-along, go-along majority, and not . . . an evangelical Christian orthodoxy, that threatens to curtail the religious freedom of those devout enough to be different."—Peter Steinfels, American Prospect

"On finishing this book, the reader has the feeling of just having completed a rare provocative workshop conducted by a skillful objective observer. To an extremely controversial subject, the author brings insight gained from harvesting the research of many other scholars of American History. . . . It is a textbook for everyone seriously examining the entire perspective of the history of religious freedom in the United States from the revolutionary scene to the 21st century."—Patricia James Sweeney, Catholic Library World

"Taken as a whole, the book provides a useful exercise in critical thinking, as well as way for students to engage the broader literature on the religion clauses."—Paul Moke, American Review of Politics

"This book is a thoughtful, deeply informed, and provocative assessment of the role of religion in American public life. Joseph Viteritti brings a wise and nuanced perspective to issues that daily perplex us. With his large knowledge of American history and law, he helps us think through the dilemmas that keep the courts, the public schools, and other institutions tied up in knots about how to deal with the claims of religion. The Last Freedom deserves a large audience."—Diane Ravitch, author of The Language Police: How Pressure Groups Restrict What Students Learn

"Few topics excite so much controversy as the relationship between religion and democracy, and none demand our attention more urgently. In this beautifully written book, Joseph Viteritti offers a rich, historically informed exploration of this important topic. By questioning conventional wisdom and avoiding the clichés of both the Left and the Right, Viteritti has produced an even-handed, original treatment of a volatile subject. This book is sure to be of interest to scholars and citizens concerned about religion's place in America's public life."—Christopher L. Eisgruber, provost of Princeton University

"This is a solid, well-argued, and vigorously written book on an important subject. Most books on religion in the schools and the Constitution are by Constitutional lawyers, and rarely look into the larger questions of the role of religion and religious belief in the United States. That is the special virtue of this book."—Nathan Glazer, professor emeritus, Harvard University