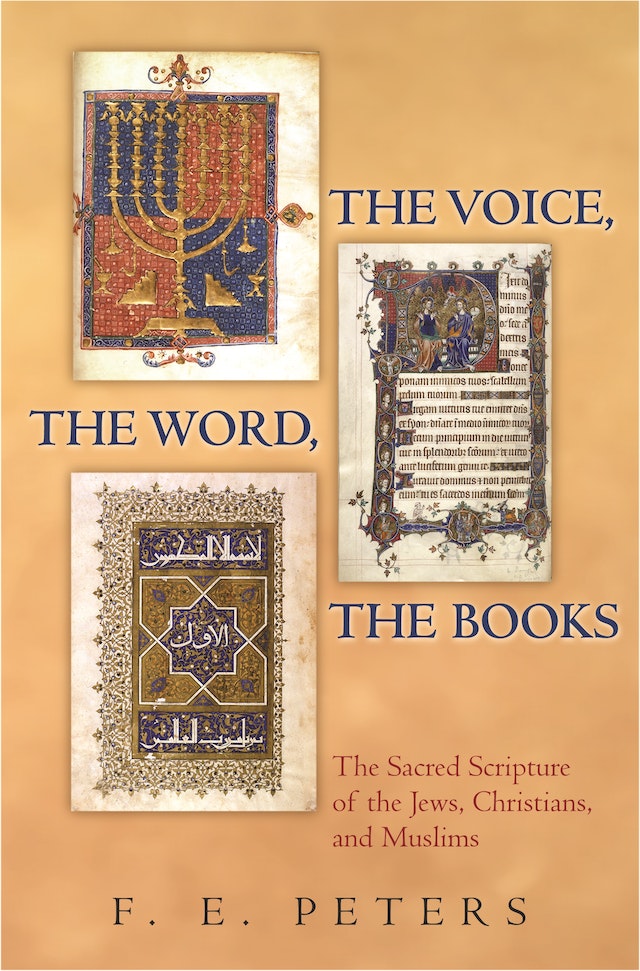 Jews, Christians, and Muslims all believe that their Scriptures preserve God’s words to humanity, and that those words were spoken uniquely to them. In The Voice, the Word, the Books, F. E. Peters leads readers on an extraordinary journey through centuries of written tradition to uncover the human fingerprints on the Hebrew Bible, the New Testament, and the Quran, sacred texts that have enriched millions of lives.


Bringing the latest Biblical and Quranic scholarship to a general audience, Peters explains how these three powerfully influential books passed from God’s mouth, so to speak, to become the Scriptures that we possess today. He reveals new insights into their origins, contents, canonization, and the important roles they have played in the lives of their communities. He explores how they evolved through time from oral to written texts, who composed them and who wrote them, as well as the theological commonalities and points of disagreement among their adherents. Writing in the comparative style for which he is renowned, Peters charts the transmission of faith from the spoken word to the printed page, from the revelations on Sinai and Mount Hira to Mamluk ateliers in Cairo and Gutenberg’s press in Mainz.


Peters is an acknowledged expert who has written extensively on these three great world religions, each of them an inheritor of the faith of Abraham. Published in conjunction with an exhibit at the British Library, this illustrated book includes beautiful images of the rare editions on exhibit and constitutes Peters’s most ambitious and illuminating examination yet of the sacred texts that so inform civilization both East and West.

F. E. Peters is Professor of Middle Eastern and Islamic Studies at New York University. His books include The Children of Abraham: Judaism, Christianity, Islam: A New Edition and the forthcoming The Creation of the Quran: The Making of Muslim Scripture (both Princeton).

"This is undoubtedly one of the best single volumes on the history of sacred text in the Abrahamic faiths."—Publishers Weekly

"Many readers will appreciate this probing interfaith investigation for the insight it offers into sacred books that both link and divide the world of faith."—Booklist

"Highly readable...The Voice, the Word, the Books, with its lavish illustrations and adequate index, will prove very valuable for those teaching an introduction to the Hebrew Bible, the New Testament, or the Koran."—Patrick J. Ryan, The American

"Readers who have some knowledge of biblical history and scholarship will already be familiar with much of the territory Peters surveys. But here that familiar territory borders on a detailed discussion of the Qur'an, and the frontier between these two traditions makes for an illuminating and often surprising adventure of ideas...The depth of the author's scholarship is...evident on every page."—Lawrence S. Cunningham, Commonweal

"The open critique, dialogue and reworking of a tradition, which has been essential to the relevance of Judaism and Christianity to the modern world, awaits its day in Islam. In Peters' work you will find clues as to how big that task will be."—Rachael Kohn, Australian Review of Public Affairs

"F. E. Peters offers here a remarkably well-informed, thoughtfully conceived, and elegantly written comparative. . . . The scholarship is, in my opinion, an example of the comparative study of religion at its finest. The author's argument is grounded in first-hand, extensive knowledge of each tradition he handles, nourished by wide and incisive readings of secondary scholarly studies, and shaped overall by a clearly envisioned comparative. . . . In my opinion, Peters has not only delivered fully on this promise to mark the histories of the Abrahamic scriptural traditions as a passage from spoken word to text and back to spoken utterance, but also presented the field of religious studies with a model for comparative studies beyond the Abrahamic traditions as well."—Martin S. Jaffee, Journal of the American Academy of Religion

"In these days it is especially a pleasure to encounter a gentle, intelligent work, written for the educated general public, that promotes understanding, even empathy, for the other. Peters . . . offers new information and insights for practitioners of these faiths as well as for the inquiring and the curious."—Robert W. Lebling, Saudi Aramco World

"Peters has made an important contribution to the comparative study of Judaism, Christianity, and Islam."—Barry Dov Walfish, Journal of Religion

"The Voice, the Word, the Books is an important new work on the authoritative texts of the Abrahamic religious traditions. It amounts to a comparative study of the three major Western faiths by looking through a window—in this case the window of scripture. Frank Peters is preeminently qualified to write such a work."—Richard C. Martin, Emory University

"This is a thorough and rich book, the remarkable work by one of the great authorities of our time on the three Abrahamic monotheistic religions. It examines scripture—Jewish, Christian, and Muslim—from every conceivable angle. It is written in Peters's engaging prose and accessible to any intelligent reader."—Mark R. Cohen, Princeton University