The history and science behind efforts to predict major disasters, from tsunamis to stock market crashes 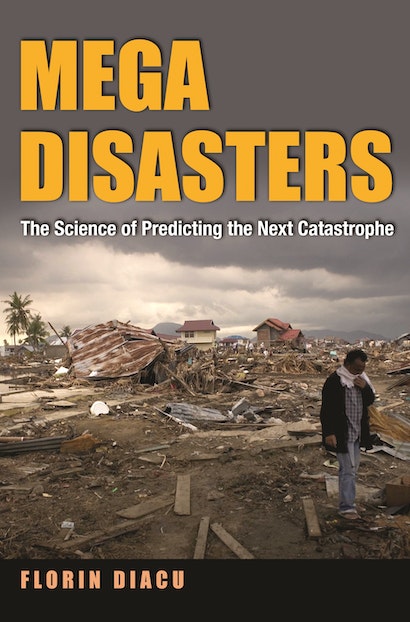 Can we predict cataclysmic disasters such as earthquakes, volcanic eruptions, or stock market crashes? The Indian Ocean tsunami of 2004 claimed more than 200,000 lives. Hurricane Katrina killed over 1,800 people and devastated the city of New Orleans. The recent global financial crisis has cost corporations and ordinary people around the world billions of dollars. Megadisasters is a book that asks why catastrophes such as these catch us by surprise, and reveals the history and groundbreaking science behind efforts to forecast major disasters and minimize their destruction.

Each chapter of this exciting and eye-opening book explores a particular type of cataclysmic event and the research surrounding it, including earthquakes, tsunamis, volcanic eruptions, hurricanes, rapid climate change, collisions with asteroids or comets, pandemics, and financial crashes. Florin Diacu tells the harrowing true stories of people impacted by these terrible events, and of the scientists racing against time to predict when the next big disaster will strike. He describes the mathematical models that are so critical to understanding the laws of nature and foretelling potentially lethal phenomena, the history of modeling and its prospects for success in the future, and the enormous challenges to scientific prediction posed by the chaos phenomenon, which is the high instability that underlies many processes around us.

Yielding new insights into the perils that can touch every one of us, Megadisasters shows how the science of predicting disasters holds the promise of a safer and brighter tomorrow.

Florin Diacu is professor of mathematics and former director of the Pacific Institute for the Mathematical Sciences at the University of Victoria in Canada. He is the coauthor of Celestial Encounters: The Origins of Chaos and Stability and the coeditor of Classical and Celestial Mechanics: The Recife Lectures (both Princeton).

"He is at his best when discussing matters closest to his own field, celestial mathematics; and he makes a compelling case for developing the means, as the Russians appear to be doing, of batting asteroids out of humanity's ballpark."—Trevor Butterworth, Wall Street Journal

"Author and mathematics professor Diacu (Celestial Encounters: The Origins of Chaos and Stability) presents a civilian-friendly guide to methods, like numerical modeling, used to understand, quantify, and possibly predict disasters. Written simply but without being simplistic, Diacu's text is driven by enthusiasm for his field and its potential for solving some of humanity's big problems. In nine chapters, Diacu examines natural disasters—volcanic eruptions, earthquakes, hurricanes and typhoons, tsunamis and floods—but also takes time to examine human-driven disasters: financial collapse, pandemic disease, and climate change. Diacu chronicles the history of each field of prediction clearly and concisely, illustrating how developments in mathematics drove developments in geology, and vice-versa, as well as the unpredictable variables as dictated by 'the monkey in the machine,' chaos theory. A chapter on climate change is particularly insightful and important. Few non-scientists understand how climate models work, but it would dispel a lot of skepticism if they did; Diacu manages it in just seven pages, in language anyone can understand."—Publishers Weekly

"The result is an excellent history of natural disasters and of the science behind understanding and mitigating those disasters. For a who's who of volcanic eruptions, major earthquakes, big hurricanes, asteroid near-hits or historic pandemics, this book is the place to go."—Kristina Bartlett Brody, Science News

"Diacu is a mathematician who uses his professional and outstanding literary skills to provide a remarkable analysis of the 'science' of prediction. . . . In an age where the news media and large sections of society seem to feast on dire predictions and the threat of many 'imminent' disasters, Megadisasters should be required reading for all intelligent human beings."—Choice

"Our desire to predict the future is certainly an interesting story that has led to some fascinating work, and it is well described here. Diacu takes us for a good tour of the science behind predictions in areas as diverse as mudslides, financial crashes, epidemics and climate change. And there are also exciting stories, like the one about the first people to fly into the eye of a hurricane."—David Orrell, Literary Review of Canada

"In Megadisasters, Florin Diacu takes the reader on a gripping tour of all the forces of nature that wreak havoc on our species, forcing us all, in the end, to cherish every day that Earth does not manage to kill us."—Neil deGrasse Tyson, author of The Pluto Files

"Like a scientific detective, Diacu presents a riveting account of spine-chilling megadisasters facing our civilization, ranging from abrupt climate change to killer comets and the collapse of the world's financial system. This book held me totally spellbound."—Edward Belbruno, author of Fly Me to the Moon

"Megadisasters tracks the history of our development of knowledge about sudden catastrophes. The book is well conceived and written with considerable clarity. Diacu does a nice job of showing what is predictable and what isn't."—William F. Ruddiman, author of Plows, Plagues, and Petroleum: How Humans Took Control of Climate

"This book is timely. The public and even many scientists misunderstand the limits of our ability to predict natural (and some not-so-natural) events. Diacu writes well and effectively integrates the human experience with disasters and provides a historic background for our understanding of a variety of natural phenomena. Megadisasters is a winner."—Grant Heiken, coauthor of The Seven Hills of Rome: A Geological Tour of the Eternal City