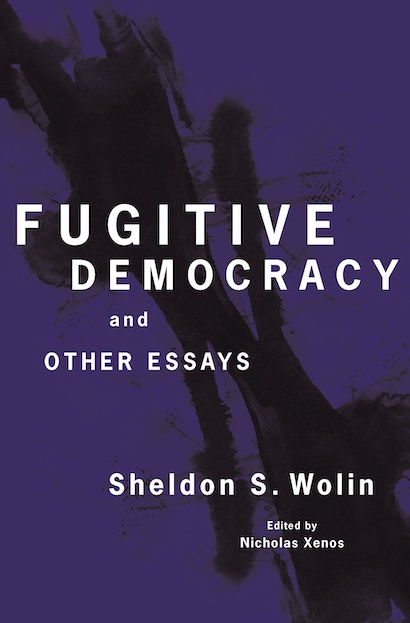 Sheldon Wolin was one of the most influential and original political thinkers of the past fifty years. Fugitive Democracy brings together his most important writings, from classic essays such as “Political Theory as a Vocation,” written amid the Cold War and the conflict in Vietnam, to his late radical essays on American democracy such as “Fugitive Democracy,” in which he offers a controversial reinterpretation of democracy as an episodic phenomenon distinct from the routinized political management that passes for democracy today.

The breathtaking range of Wolin’s scholarship, political commitment, and critical acumen are on full display in this authoritative and accessible collection. He critically engages a diverse range of political theorists, including Thomas Hobbes, Karl Marx, Max Weber, Hannah Arendt, John Rawls, Michel Foucault, and Richard Rorty. These essays grapple with topics such as power, modernization, the sixties, revolutionary politics, and inequality, all the while showcasing Wolin’s enduring commitment to writing civic-minded theoretical commentary on the most pressing political issues of the day. Here, Wolin laments the rise of conservatives who style themselves as revolutionary, criticizes Rawlsian liberals as abstract to the point of being apolitical, diagnoses postmodern theory as a form of acquiescence, and much more.

Fugitive Democracy offers enduring insights into many of today’s most pressing political predicaments, and introduces a whole new generation of readers to this provocative figure in contemporary political thought.

Sheldon S. Wolin (1922–2015) was professor emeritus of politics at Princeton University. His books include Politics and Vision: Continuity and Innovation in Western Political Thought and Democracy Incorporated: Managed Democracy and the Specter of Inverted Totalitarianism (both Princeton). Nicholas Xenos is professor of political science at the University of Massachusetts, Amherst. His books include Cloaked in Virtue: Unveiling Leo Strauss and the Rhetoric of American Foreign Policy.

"These essays are stunning. No one speaks for democracy as Wolin does."—Anne Norton, author of On the Muslim Question

"This collection is long overdue. Fugitive Democracy is a book that every current and future political theorist and political philosopher should own."—Melissa A. Orlie, author of Living Ethically, Acting Politically